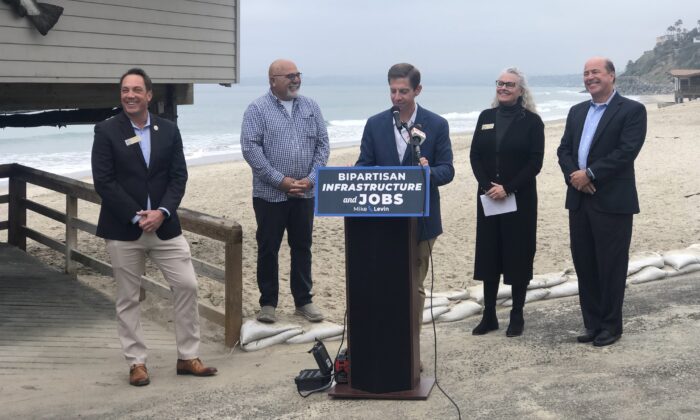 San Clemente Officials: What to Expect From Biden’s Infrastructure Bill in 2022

San Clemente city officials and Rep. Mike Levin (D-Calif.), who represents ten cities across North County San Diego and South Orange County, said the quality of life for millions of California residents would be improved by creating jobs and growing the economy through President Biden’s Bipartisan Infrastructure Bill, which was passed by Congress last year.

“My great hope and expectation are that we’ll see shovels in the ground in the coming months,” Levin said at the historic San Clemente Pier on Jan. 7.

“Our beach is the most important asset,” Councilwoman Kathleen Ward said. “But it is eroding. … There has been infrastructure built up the coast that is blocking the migration of sand to our beaches and is causing our coastline to erode.”

Mayor Pro Tem Chris Duncan said, “San Clemente beaches are the lifeblood of our city—that is who we are.”

Of the $1.2 trillion infrastructure funding, California will receive approximately $45.5 billion.

The state plans to advance a list of projects through funding distribution among state agencies and local governments, according to Levin.

“I’m already fighting to get as much of that funding—and all of the funding from the bipartisan infrastructure law—back to our community as soon as possible,” Levin said. “I am as eager, probably more eager than anyone to see these funds lead to construction.”

The bill allocates $29.5 billion—almost two-thirds of California’s share—to road and bridge maintenance. The first round of highway funds, nearly $5 billion, will arrive in 2022, and the remaining $25 billion is expected to hit the roads over the next five years, the Department of Transportation announced last month.

He said an “overwhelming majority of the funds” will be subjected to the Davis-Bacon and Related Acts, a 1931 law requiring federally funded contractors and subcontractors to pay their laborers no less than the prevailing wage.

For more accessible internet statewide, the bill provides $100 million to expand broadband coverage while $40 million goes to protection against cyber-attacks.

Levin added that the infrastructure bill can “perhaps, most importantly, position the United States to win the 21st century.”

A “Buy American” provision was a part of the legislation to ensure American iron, steel, and other construction materials manufactured in the country are used for all taxpayer infrastructure and public works projects, according to Levin.