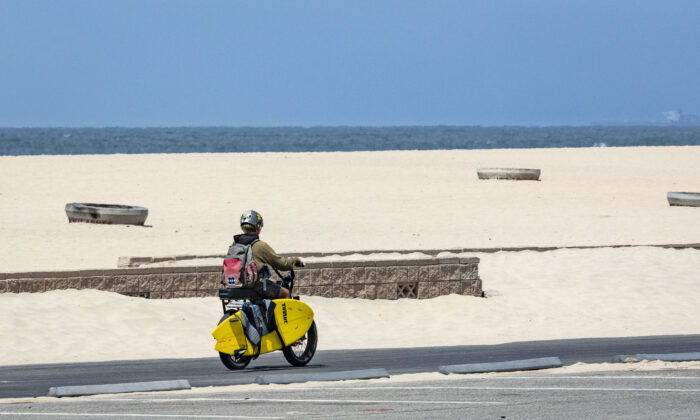 A boy rides an E-Bike with his surfboard along the beach in Huntington Beach, Calif., on May 20, 2021. (John Fredricks/The Epoch Times)
Southern California

SAN CLEMENTE, Calif.—The San Clemente City Council unanimously voted for an electric bicycle (e-bike) ban from its beach trail, beaches, and pier during a Jan. 18 meeting, excluding the inland trails at the request of council members and residents.

After a year of discussion, reviews, and public input, the council voted to prohibit e-bikes on the path stretching nearly 2 1/2 miles along the coast before more accidents and injuries occurred.

“We have over 2.5 million people walking that trail every year,” Councilwoman Laura Ferguson said during the meeting. “We have people getting hit, and speeding—it’s very narrow with a lot of use.”

Regulars of the beach trail and supporters of the e-bike ban voiced their concerns over the general lack of safety while walking or exercising on the path.

Initially, the beach trail allowed the use of regular bicycles, as designers probably didn’t anticipate that electric-powered two-wheelers traveling at 30 miles per hour, without licensing requirements, would become so popular along the coast, especially among minors who can’t yet drive.

During the Jan. 18 council meeting’s public comment period, one speaker advocated for some licensing, after nearly a decade of riding her bike on the now-banned trail.

“You have to learn the rules of the road,” she said. “These parents are throwing their kids on e-bikes, and they’re riding double with no helmets. Nobody’s taught them the safety that should come along with being on the road.”

Mayor Gene James said, “It boils down to bad behaviors and bad actors, and in most cases, a lack of parenting.”

According to 2021 data provided by Providence Mission Hospital Mission Viejo, a local hospital, 106 adults and children were treated for e-bike accidents—34 of which were children under 17 years old.

“Over the past year, we have seen a surge in the number of e-bike accidents,” Providence Mission Hospital Trauma Medical Director Dr. Tetsuya Takeuchi said in a statement to The Epoch Times. “The safest thing your child can do to protect themselves is to wear a helmet. It is vital that parents model the importance of wearing a helmet. As parents, we need to set a good example and wear our own helmets consistently.”

Takeuchi said that wearing the proper protective helmet and gear while riding any recreational wheeled device—e-bikes included—could lower the risk of head injuries by nearly 70 percent.

The city planned on banning e-bikes on the four other municipal trails away from the coast, but reconsidered during the meeting, after the council and public members figured the threat was not as prominent.

Regulars said they rarely encounter e-bikes when trekking on the inland trails.

“The city does not need a new ordinance to deal with a problem that doesn’t exist,” a speaker said during the comment period. “These bike paths and trails have been a godsend to me and provide a safe exercise and place to get some needed fresh air and sunlight. Please do not take this healthy outlet away from me.”

While the council removed the ban on all city trails, it added riding regular bikes to the list of prohibited activities on the Corto Lane section of the beach trail, which starts at the pier and extends approximately 300 yards south.

Councilmembers said they plan to address riding e-bikes along the city’s sidewalks in future meetings.