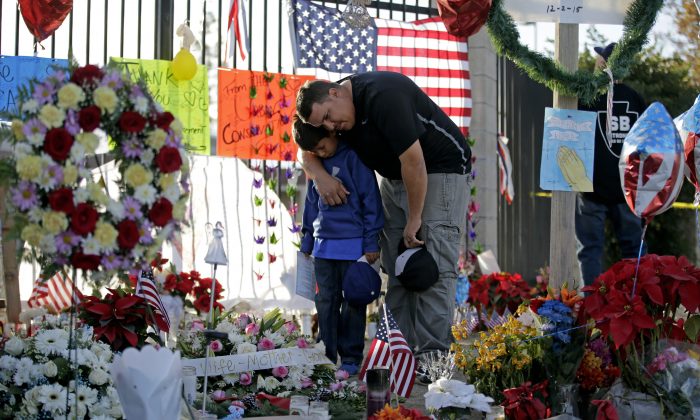 San Bernardino County to Reopen for Business After Attacks

SAN BERNARDINO, Calif.—Thousands of employees of San Bernardino County began returning to work Monday, five days after a county restaurant inspector and his wife opened fire on a gathering of his co-workers.

The reopening of much of the government’s offices signals an effort to return to normalcy for a community that has been in shock and mourning since Wednesday’s attack killed 14 people and injured 21.

“To honor them, to express our gratitude for their unimaginable sacrifice, we have to fight to maintain that ordinary,” San Bernardino County Supervisor Janice Rutherford said Monday of the victims. “We can’t be afraid of our lives, of our community, of our neighbors, of our co-workers.”

The Board of Supervisors said at a news conference that all facilities have increased security, including armed sheriff’s patrols, and officials were considering additional permanent safeguards. Counseling centers and a hotline were open, and managers were urged to look for signs of distress in their employees.

Public Health Director Trudy Raymundo, who attended the holiday luncheon where Tashfeen Malik and Syed Farook opened fire, thanked law enforcement who guided workers to safety and shielded them from harm. She also expressed gratitude for the outpouring of support worldwide.

“Today I want to ask the community to mourn with us,” she said. “I ask that you come together and hold each other strong because it is the strength that will help us heal.”

Following the attack, the county shut down except for essential services, with many of its 20,000 employees staying home, county spokeswoman Felisa Cardona said. While most employees went back to work Monday, those at the Environmental Health Services division, where Farook and many of the victims worked, will be off at least one more week, she said.

Investigators were looking into what led Malik, 29, and Farook, 28, to attack Farook’s co-workers. The couple later died in a furious shootout with police.

Malik attended a religious school in the Pakistani city of Multan briefly between 2013 and 2014 but didn’t receive a diploma, Farhat Hashmi, founder of Al-Huda International Seminary, said in a statement on her website. The school is a women-only madrassa with locations across Pakistan and in the U.S. and Canada.

Hashmi has been criticized for promoting a conservative strain of Islam, but the school has no known links to extremists. She said the organization was not political and denounced violence and acts of terrorism.

“It seems that she was unable to understand the beautiful message of the Quran,” Hashmi’s statement said, referring to Malik.

President Barack Obama said in a prime-time address Sunday night that the attack was an “act of terrorism designed to kill innocent people.” While there was no evidence the shooters were directed by a terror network overseas or were part of a broader plot, “the two of them had gone down the dark path of radicalization,” he said.

Mourners comforted one another Monday near a makeshift street-corner memorial in San Bernardino, where people put up rows of American flags and candles, alongside bouquets, balloons and cards. A poster read “Pray for the world” and flowers surrounded photos of the 14 victims.