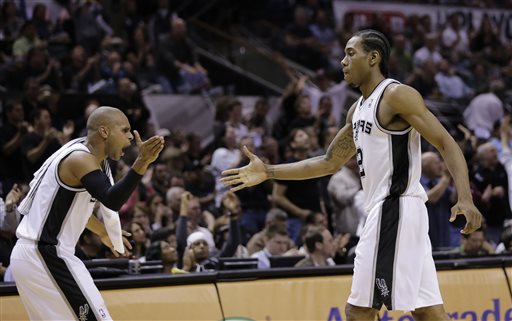 San Antonio Spurs' Patty Mills, left, slaps hands with Kawhi Leonard as Leonard walks off the court during the first half of Game 5 of a Western Conference semifinal NBA basketball playoff series against the Portland Trail Blazers, Wednesday, May 14, 2014, in San Antonio. (AP Photo/Eric Gay)
NBA

The San Antonio Spurs are facing the Oklahoma City Thunder in the Western Conference finals and game 2 is set for Wednesday night.

Game 2 is also in at the AT&T Center San Antonio.

The Spurs took out the Portland Trail Blazers 4-1 in the previous round while the Thunder topped the Los Angeles Clippers 4-2.

See an Associated Press preview below the photo.

Spurs turned Game 1 into 5 on 2 advantage

Undermanned yet undaunted, Kevin Durant and Russell Westbrook threw everything they had at the San Antonio Spurs in Game 1 of the Western Conference finals.

Even when they were down by 15 points in the first half, the Oklahoma City Thunder’s dynamic duo didn’t give in.

They used their athleticism and shot-making to will Oklahoma City back into the game, and when Westbook’s 19-foot jumper splashed through the net with just under five minutes to play in the third quarter, the Thunder jumped ahead.

What became apparent as the highly anticipated matchup wore on was that the Spurs were turning it into a game of two-on-five.

Tim Duncan, Manu Ginobili and the rest of the experienced Spurs sat back in that third quarter as Durant and Westbrook led the rally.

But there are no TKOs in basketball.

Every game goes the distance. And by the time the fourth quarter came around, the Thunder didn’t have anything left. And if Durant and Westbrook don’t get more help from their supporting cast, this could be an awfully short series.

“We turned the ball over a little too much but we’ve got to continue to trust whether the guys are hitting shots or not,” Durant said.

“We’ve got to keep playing within our offense and playing with the pass. We’ll be fine. We do a good job of attacking, not just for ourselves, but for our teammates. We’ve just got to continue to trust.”

Durant and Westbrook combined for 19 points in the first seven minutes of the third quarter on Monday night to get the Thunder back into the game.

But they scored just nine total points over the final 17 minutes of the game while the deep and balanced Spurs continued to carve up a defense that was sorely missing shot-blocker Serge Ibaka.

Game 2 is on Wednesday night in San Antonio.

“They’re not going to be stopped but if those kinds of players can be made to work hard and just take something away, it can work to your advantage,” Spurs coach Gregg Popovich said.

Even more glaring, the remaining three Thunder starters — Nick Collison, Kendrick Perkins and Thabo Sefolosha — combined to score five points for the entire game. The trio didn’t score a single point in the second half.

The numbers can be a little misleading because coach Scott Brooks played bench players Reggie Jackson, Caron Butler and Derek Fisher more minutes in the game, hoping that a smaller lineup would give San Antonio more problems on the defensive end.

What it did in the end was make life much easier for Duncan, who scored 27 points, Ginobili and Leonard to get to the basket with ease and help the Spurs score 66 points in the paint.

“Look, Serge is not going to be here,” Durant said flatly after the game. “He’s injured for the rest of the postseason, so we’ve got to move past that and just keep playing as a team.”

Collison, Perkins and Sefolosha have never been considered to be scorers, so relying on them to produce on that end of the court may be asking too much.

But after the struggles defensively of the smaller unit in Game 1, Brooks may be forced to go to the bigger lineup and also play rookie center Steven Adams more in an effort to make life harder on theSpurs offense.

But making a shot or two sure would help as well.

Fisher scored a surprising 16 points while Jackson added 13, but Collison and Adams — the two players most responsible for filling the void left by Ibaka — combined for four points, five rebounds and two blocks in 32 total minutes.

“The lineups, there’s no magic,” Collison said. “I don’t think there’s any magic lineups if we’re not going to have the effort and the concentration. That’s our job as players, and then coach will figure out what works for us. But for us we’ve got to be really engaged and ready to go when the game starts.”