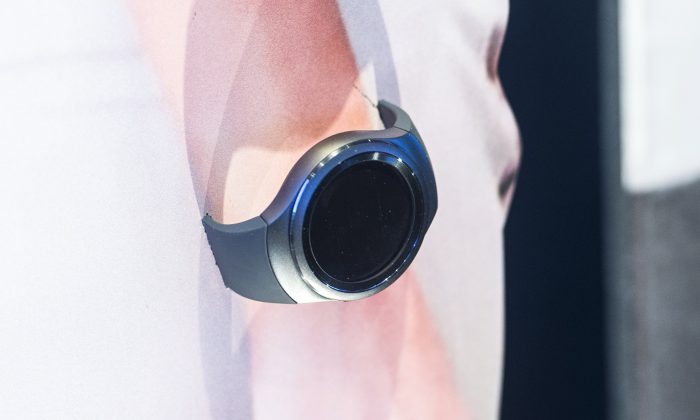 A Samsung Gear S2 watch is fitted onto a cardboard cutout at the booth of South Korean electronics giant Samsung ahead of the opening of the 55th IFA (Internationale Funkausstellung) electronics trade fair in Berlin on September 3, 2015. (John MacDouglall /AFP/Getty Images)
Tech

Is Samsung’s New Gear S2 Going to Be Compatible With iPhone?

The recently unveiled Gear S2 is arguably the first smartwatch from Samsung that doesn’t look like a clunky piece of hardware you wouldn’t want to be caught dead wearing. Coupled with what seems like a sleek Tizen interface, an elegant rotating bezel, and an impressive 2-3 days of advertised battery life, the Gear S2 is seemingly positioned as a worthy competitor to the Apple Watch.

With the S2, Samsung, to its credit, has extended the wearable’s compatibility to handsets outside of the Samsung family. As we detailed last week, the S2 will run just fine on handsets from the likes of Asus, HTC, Huawei, Kyocera, Lenovo, LG, Motorola, Xiaomi and a host of other devices, provided that they are running Android 4.4 or later and have at least 1.5GB of RAM.

That’s a great start and undeniably a wise strategic move. Building on that, now comes word that Samsung may be looking to extend S2 compatibility even further and bring it to the iPhone.

Though Samsung didn’t offer a specific time frame as to when we might see official S2 support for iOS, the company made a point of stating that they are “positively looking into opening it up.”

Does Samsung Plan to Release the Galaxy Note 5 Sooner Than Anyone Expected?

On a related note, Google this past week announced that it plans to open up future Android Wear devices to iOS.