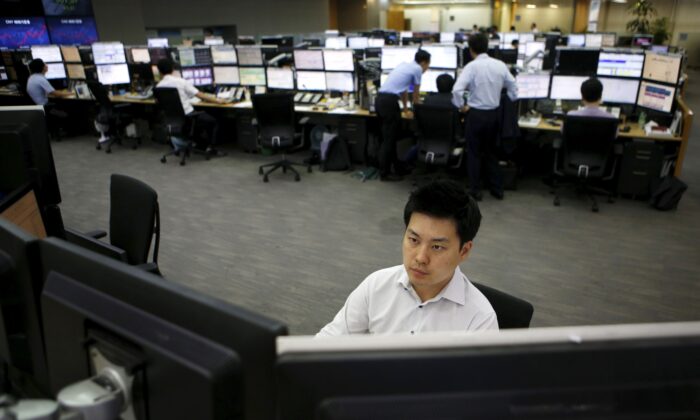 A currency dealer works at a dealing room of a bank in Seoul, South Korea, on Aug. 25, 2015. (Kim Hong-Ji/Reuters)
Stocks

“This is the first time in the history of the U.S. markets where Asia Pacific investors, and Korean investors, are going to have the ability to trade U.S. stocks before U.S. investors,” said Brian Hyndman, president of Blue Ocean.

The new service began on Monday and enables the real-time trading of all 8,000 U.S. National Market System stocks and exchange-traded products between 10 a.m. and 6 p.m. Seoul time, through Samsung Securities, the brokerage subsidiary of Samsung Group, which partnered with Blue Ocean.

Asian investors buying stocks during Seoul business hours through Samsung will be able to trade with each other, as well as against the U.S. Blue Ocean order flow, he added.

Blue Ocean is owned by multiple investors, with the biggest being Urbana Corp, which is also the largest shareholder in the Canadian Securities Exchange.