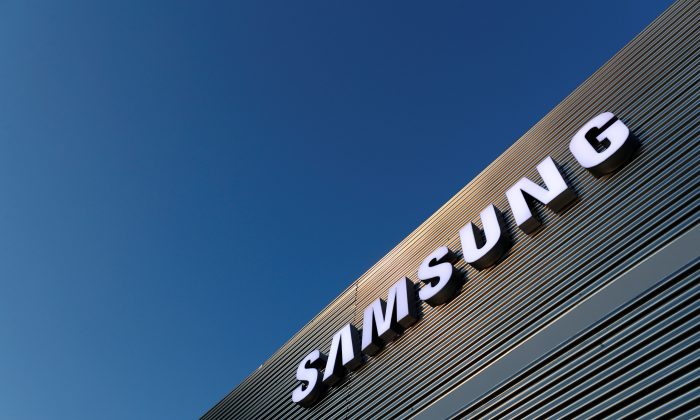 The logo of Samsung is seen on a building during the Mobile World Congress in Barcelona, Spain on Feb. 25, 2018. (Yves Herman/Reuters)
Companies

SEOUL—South Korea’s top financial regulator said Samsung BioLogics Co. Ltd. had intentionally breached accounting rules ahead of its 2016 listing, leading to a suspension in trading of the biotech firm’s shares and a review of its listing status.

The Financial Services Commission (FSC), which has been reviewing the matter after a complaint by an activist group and politicians that the Samsung Group arm unfairly inflated its value, also called for Samsung BioLogics’ CEO to be fired.

The disciplinary action is a blow to South Korea’s biggest conglomerate, which is banking on biopharmaceuticals for growth and announced plans in August to invest 25 trillion won ($22 billion) in the business and in other areas such as artificial intelligence and 5G mobile technology.

It also comes at an awkward time for the group, as heir Jay Y. Lee is awaiting a Supreme Court ruling on bribery charges and politicians are calling for transparency in its governance.

Critics have said Samsung BioLogics breached accounting standards by switching the valuation method of its stake in a joint venture in 2015 to inflate profits before listing a year later.

BioLogics shares have slumped 30 percent since the regulators began a review into the allegations in May, leading to a loss of about $9 billion in market value.

BioLogics has denied wrongdoing, citing an agreement with its U.S. partner as the reason for valuing its stake in the joint venture at fair market value instead of at book value.

After FSC’s decision on Nov. 14, BioLogics repeated its denial, and said it would file an administrative lawsuit against the regulator.

The Korea Exchange said in a statement the suspension in trading of BioLogics shares would continue for at least 15 business days while the bourse conducts a review which could lead to de-listing.

The bourse, however, said there had been no case of de-listing so far in South Korea over violation of accounting standards.

The FSC also fined BioLogics 8 billion won ($7 million) for the breaches and sent the case to state prosecutors.

Kim Yong-beom, vice chairman of the FSC, said the company “abnormally” adopted different accounting rules to avoid depreciation of the company’s value should a U.S. partner exercise a call option to boost its stake in the venture.

He also said the company was wrong in not recognizing the call option earlier when it signed the joint venture deal in 2012.

Samsung BioLogics is 75 percent owned by tech giant Samsung Electronics and Samsung C&T Corp., in which Lee is the top shareholder.

Foreigners hold about 9 percent of the shares, according to data from the Korea Exchange.

BioLogics Chief Executive Kim Tae-han, who is not a member of the controlling family, has been with Samsung Group since the beginning of his career in 1979. He became the CEO in 2011 after senior positions in the group-wide strategy office and the group’s chemical unit.