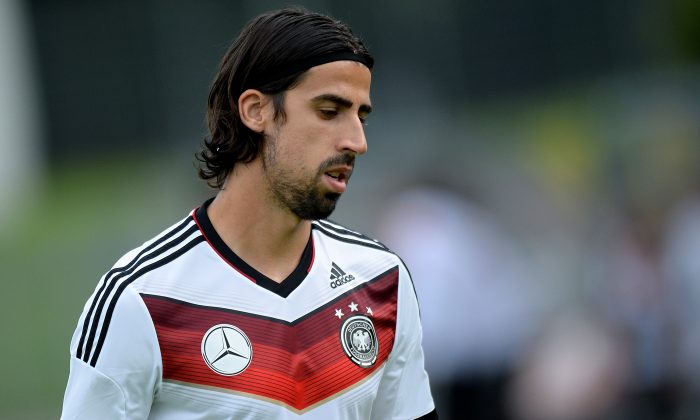 Sami Khedira of Germany looks on during a training session of the German national football team at Paul Janes Stadion on May 31, 2014 in Duesseldorf, Germany. (Photo by Sascha Steinbach/Bongarts/Getty Images)
Sports

Sami Khedira could be on his way to the Emirates Stadium.

Wenger believes that Khedira will link up well with his former Real Madrid and Germany international team mate Mesut Ozil.

Chelsea and Man United are reportedly also keen on the former Stuttgart player.

Germany Coach: Best is Yet to Come at World Cup

RIO DE JANEIRO (AP) — The best is yet to come from Germany. That was the promise, at least, from coach Joachim Loew ahead of Friday’s World Cup quarterfinal against France at the Maracana Stadium.

While Germany looked impressive in a 4-0 win over Portugal in its opening match, the three-time champion struggled in its next games, being held to a 2-2 draw by Ghana, edging the United States 1-0 and needing extra time to beat Algeria 2-1.

“We have not yet delivered our best possible performance,” Loew said Thursday. “But I don’t think anyone has reached their absolute top performance yet.

“It’s not a computer game that is easily figured out — You can’t easily figure out your opponent and it’s not easy to program your own team. Mistakes are made. … And then there are other elements from beyond the pitch.”

An element such as this: seven Germany players have been struggling with illness.

“One-third of our squad has been complaining about a sore throat,” Loew said. “But yesterday and today all players have been training and none were feeling exhaustion. I just hope that stays stable until tomorrow.”

Germany played its group matches in the warmer, northeastern climates of Salvador, Fortaleza and Recife then faced Algeria in the second round in cool and damp conditions in the southern city of Porto Alegre.

“Perhaps they got contaminated from others, or maybe it was the difference in temperatures, or the air conditioning,” Loew said.

Center back Mats Hummels missed the Algeria game due to illness but Loew indicated he’ll be back against France. Likewise, midfielder Bastian Schweinsteiger is expected to return from severe cramps after being substituted against Algeria.

The only Germany player ruled out is defender Shkodran Mustafi, who will miss the rest of the tournament with a left hamstring injury.

Against Algeria, Germany struggled when it lost possession and Algeria put together swift counterattacks.

“I think this kind of match is decided in midfield. If we can dominate there it will say a lot in terms of achieving a positive result,” midfielder Toni Kroos said. “Our style of play is to keep the ball on the ground and we have many players that are very good at that. We need to have more precise passes and have better concentration. That’s our match philosophy.”

While France is aiming to exceed expectations, Germany had loftier goals from the start.

“They want us to get the title,” Kroos said. “Anything else will be (considered) a defeat.”