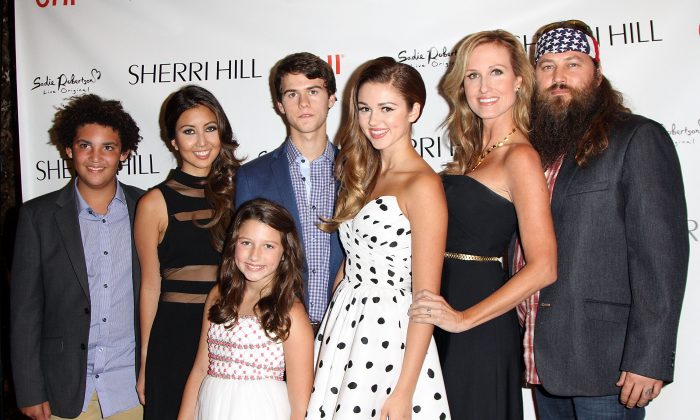 Sadie Robertson praises a lot of people in her new “Live Original,” including sisters Bella and Rebecca, father Willie, and mother Korie.

The book, which recently came out, features Sadie talking about her life and imparting advice.

Sadie says in a part titled “The Happiest People I Know” that her little sister Bella and older sister Rebecca both know how to joke around and have fun without being crude or taking things too far.

“Bella is only in fifth grade, but I know a lot of fifth graders who already take life very seriously,” she said.

“Bella does not! She loves to laugh and play and if she is involved in something, she is determined to make it a fun, happy experience for herself and for everyone else. She has a great sense of humor, which I think is very mature for her age. Unlike a lot of kids her age, she does not laugh at bathroom jokes or sarcastic comments about other people. She knows what is genuinely funny in a clean, wholesome way, and she can fish out that kind of humor like no eleven-year-old I have every met.

“I think Bella’s main goal in life right now it to put smiles on other people’s faces. She just loves to make others happy; that’s what she thinks about, so that’s how she lives.”

Sadie said that Rebecca, who is originally from Taiwan and was adopted by Willie and Korie, “is one of those people who is cute and happy and bubbly almost all the time.”

“She loves to laugh and to make others laugh, and she really enjoys telling jokes,” Sadie wrote. “The problem with her jokes is they may be funny in her native language or in the country where she was raised, but they are not funny at all in English or in Louisiana! Here’s one of her jokes: ‘One time a banana got hot and took off his coat and slipped.’ Here’s another one: ‘Once there was a match that had an itchy head; he scratched it and caught himself on fire.’

“Ha! See what I mean? The fact that the jokes are not funny ends up making Rebecca’s attempts at humor kind of funny in their own way. We all laugh at her jokes just because she tries so hard to spread laughter around out family. Rebecca is strong and positive, and other people cannot help but be happy around her.”

Sadie also included her Uncle Si in the part of the book, recalling a story of how her uncle’s house was infested with termites and they had to move out.

“Uncle Si’s response to the situation was not, ‘Oh, poor me. I’m losing the house I’ve loved and lived in all these years.’ His response was, ‘Okay. We’ve got termites. We need to get a new house,'” Sadie said.

“So they moved into a  new home and they are very happy there. I know the reason Uncle Si handled this situation so well is that he does not let his circumstances determine his happiness. He is a happy person no matter where he lives.”

And she also says she has learned how to follow her dreams from her father, who took his father Phil’s dream to another level. Phil started the Duck Commander but Willie helped grow it into an international store, partially because of the Duck Dynasty show.

“I think it’s clear that my dad is a visionary, but most people do not have any clue that he is also incredibly hardworking and that he will persevere through any kind of problem,” Sadie said.

“When my dad gets an idea of a project in his mind, he does not let it go. He is fully committed to it and works on it until it works. He does not get intimidated and if it looks like it might not happen, he just digs in deeper and keeps going for it.

“I have learned from my dad that we cannot just have a great idea or a big dream and then drop it when we have  a hard time getting it done. We have to believe in it like crazy. If we go after it one way and that does not work, then we have to pursue it another way.”