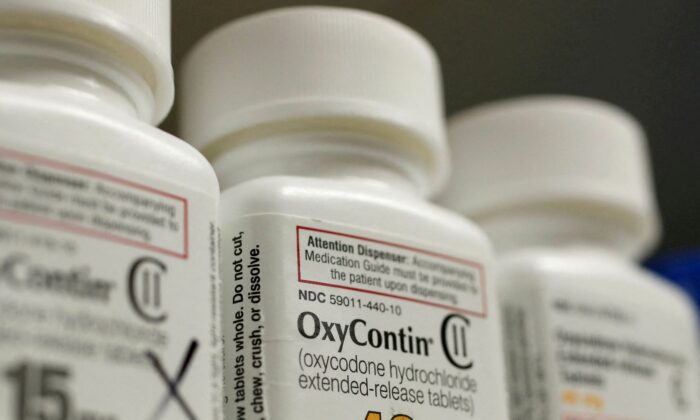 Bottles of prescription painkiller OxyContin, 40mg pills, made by Purdue Pharma L.D. sit on a shelf at a local pharmacy, in Provo, Utah, on April 25, 2017. (George Frey/Reuters)
Companies

Sacklers Near Deal to Increase Opioid Settlement in Purdue Bankruptcy

Members of the Sackler family who own Purdue Pharma LP. are nearing an agreement to boost their more than $4 billion offer to resolve sprawling opioid litigation after negotiating with states that had objected to terms of the OxyContin maker’s bankruptcy reorganization, according to a court filing.

Sackler family members and states objecting to terms of Purdue’s bankruptcy reorganization are “close to an agreement in principle” to contribute additional cash beyond the $4.325 billion they had pledged to settle opioid litigation, according to a mediator’s interim report filed on Monday.

An agreement involving members of the Sackler family and several state attorneys general could potentially end a legal challenge that has prevented Purdue from exiting bankruptcy, and clear the way for a plan aimed at helping to abate the opioid crisis.

The mediation kicked off in January among Sackler family members and several states after a U.S. district judge overturned the original settlement, which was the cornerstone of Purdue’s bankruptcy reorganization plan.

The judge found the reorganization plan improperly shielded Sackler family members, who had not filed for Chapter 11 themselves, from opioid litigation.

The mediator, former U.S. Bankruptcy Judge Shelley Chapman, said any additional contribution from the Sacklers would be solely for opioid abatement. She asked that talks be extended to Feb. 7, a request that could be considered at a bankruptcy-court hearing on Tuesday.

The report described marathon negotiating sessions held on Jan. 25–26 in New York that ran more than 12 hours each day and involved two unidentified state attorneys general who participated in person and another who joined by Zoom.

The settlement agreement had been opposed by at least eight state attorneys general, including Bob Ferguson in Washington state and William Tong in Connecticut.

Purdue, the maker of the highly addictive OxyContin opioid painkiller, filed for bankruptcy in 2019 in the face of thousands of lawsuits accusing it and the Sacklers of fueling the U.S. opioid epidemic through deceptive marketing. The opioid abuse crisis has led to nearly 500,000 overdose deaths over two decades, according to U.S. data.

Sackler family members have denied wrongdoing. Purdue pleaded guilty in November 2020 to three felonies arising from its handling of OxyContin.

Several members of the Sackler family testified during Purdue’s bankruptcy trial that their contribution to the settlement was conditioned on receiving “global peace” from opioid litigation.

By Tom Hals and Mike Spector