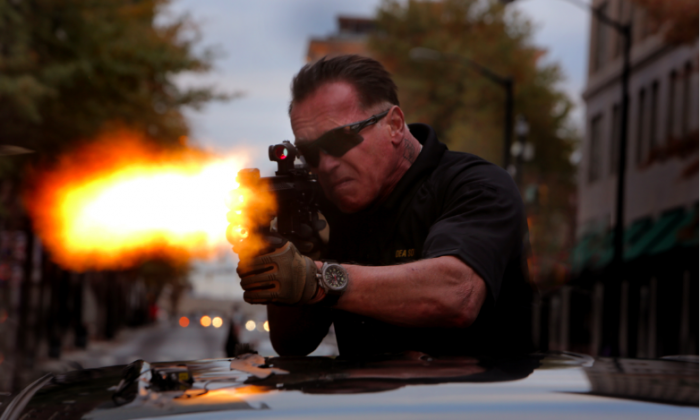 Consider Arnold. He’s lived three lifetimes. He put bodybuilding on the map like a massive asteroid crater. He became the highest-paid action star of all time. He became the Californian Guv-uh-nay-tuh. Whisper “Governator!” into a cave where a hermit’s been meditating for 500 years, and he’ll know who you’re talking about.

Then there was that, er, domestic situation. Now there’s the scramble to re-establish action-star legitimacy in his waning years.

“Sabotage” sabotages Ah-nuld’s legitimacy efforts. He’ll have more chances for sure. If you like movies, you’ve seen a bunch of Ah-nuld movies you’ve liked.

But you can miss this movie in good conscience. Why? Let me count the reasons.

John “Breacher” Wharton (Schwarzenegger) is the big-dog leader of a group of psycho DEA agents.

They’re named “Monster,” “Pyro,” “Grinder,” “Tripod,” and the like. All their downtime is spent in “gentlemen’s clubs.”

According to SEAL lore, this is how the Dick Marcinko-pioneered, early version of SEAL Team 6 was: a bunch of Harley-riding, earringed, bearded lunatics. The difference being, those supercompetent pros would die for each other. This fake SEAL-wannabe DEA team kills each other. Possibly.

Why do they possibly kill each other? They do a drug sting and attempt to thread $10 million (in plastic bags tied to a climbing rope) down a sewer. Yeah, they knew the money was there; they planned to steal it. But someone steals it back immediately.

There’s an investigation, and naturally, the DEA desk jockeys know exactly how much money was in that stack. But Breacher et al are tough guys! Nobody cracks! So they’re allowed to go smash up cartels again.

Just as they’re set to go, one by one, they begin to go splat. And the ways in which they go splat—gruesome is too weak a word for it. So is disgusting. Also sleazy. It’s like an over-the-top “CSI” episode without the modifying forensic science. It’s gruesleazgusting.

Maybe the drug lords are on to them. But then again, possibly the “Saw”-type killings are being orchestrated by one of their own.

Let’s see, who could it be? Six or seven crazy tough guys, one girl… hmm… let’s run those names again: Monster, Pyro, Tripod. And Lizzie. It’s got to be Monster who’s creating monstrosities out of his teammates, right? You can tell by his name.

They have some spectacularly articulate—poetic, even—lines to say. I present to you: “Some of us are gettin’ paid and the rest of us are just gettin’ dead.” Just wonderful. Another choice nugget: “Ammo’s cheap, my life ain’t.” Love these guys.

Atlanta homicide detective Caroline Brentwood (Olivia Williams) comes in to sleuth about and “rain on the bro-down.” With her butch haircut, slight build, and tough talk, you think, “Ah, interesting creative choice.” Then she cozies up to Breacher. Then you think: “Ah, now I’m confused.”

This film contains the most graphic nastiness of any film Ah-nuld has ever made. It’ll keep your attention, but you’ll lose your lunch and feel slimed. Strike one.

This protagonist is not Schwarzenegger’s usual one-note hero. Breacher requires maybe two notes. And while it’s interesting to see him try something new, the extra note requires actual acting. Strikes two and three. “Sabotage” is out.

Ah-nuld could never actually act. Nor did we expect it of the world’s greatest bodybuilder, whose thespian talents stopped at having serious charisma onscreen, and an astonishingly effective sense of non-Teutonic humor.

However, compared to the six or seven notes being played by his fellow actors, who are not even close to tapping their full repertoires (one’s an Oscar nominee), it’s glaringly clear that Ah-nuld is at his best when covered in mud and hollering at a giant, dreadlocked, Chewbacca-sounding Predator, “You’re one ugly… !” That’s the good Ah-nuld stuff.

“Sabotage” is sleazgruescusting. Doctors can now recommend that patients watch this movie if they ever run out of syrup of Ipecac.