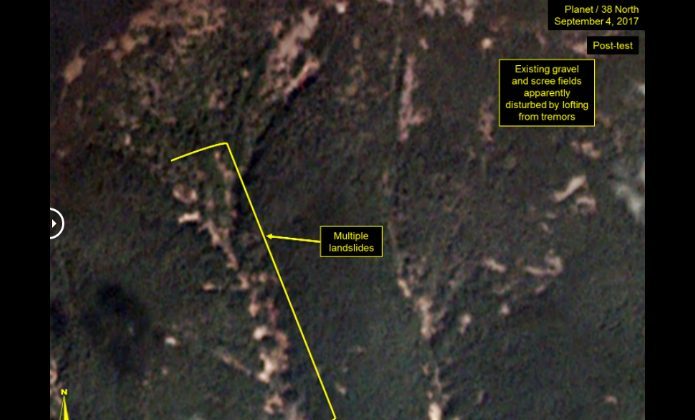 South Korea said on Wednesday traces of radioactive xenon gas were confirmed to be from a North Korean nuclear test earlier this month, but it was unable to conclude whether the test had been a hydrogen bomb as Pyongyang claimed.

North Korea conducted its sixth nuclear test on Sept. 3, prompting the U.N. Security Council to step up sanctions with a ban on the reclusive regime’s textile exports and a cap on fuel supplies.

The Nuclear Safety and Security Commission (NSSC) said its land-based xenon detector in the northeastern part of the country found traces of xenon-133 isotope on nine occasions, while its mobile equipment off the country’s east coast detected traces of the isotope four times.

“It was difficult to find out how powerful the nuclear test was with the amount of xenon detected, but we can say the xenon was from North Korea,” Choi Jongbae, executive commissioner, told a news conference in Seoul.

The commission could not confirm what kind of nuclear test the North conducted, he added.

Xenon is a naturally occurring, colorless gas that is used in manufacturing of some sorts of lights. But the detected xenon-133 is a radioactive isotope that does not occur naturally and which has been linked to North Korea’s nuclear tests in the past.

The NSSC also said the xenon traces detected had no impact on South Korea’s environment and population.

South Korean nuclear experts, checking for contamination after North Korea’s sixth and largest nuclear test, said on Friday they have found minute traces of radioactive xenon gas but that it was too early to specify its source.

The Nuclear Safety and Security Commission (NSSC) said it had been conducting tests on land, air and water samples since shortly after North Korea’s nuclear test on Sunday.

The statement said the commission was analyzing “how the xenon entered South Korean territory and will make a decision at a later time whether the material is linked to North Korea’s nuclear test”.

Xenon is a naturally occurring, colorless gas that is used in manufacturing of some sorts of lights. But the NSSC said it had detected xenon-133, a radioactive isotope that does not occur naturally and which has in the past been linked to North Korea’s nuclear tests.

There was no chance the xenon “will have an impact on South Korea’s territory or population”, the statement said.