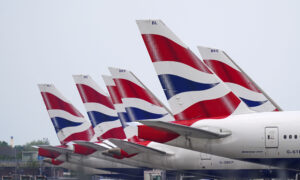 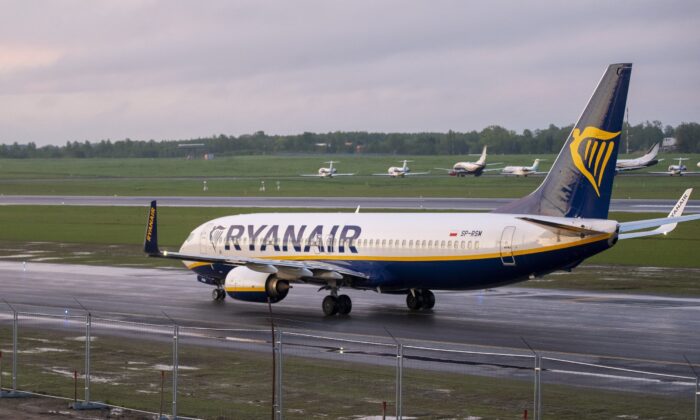 The Ryanair plane with registration number SP-RSM, carrying opposition figure Raman Pratasevich which was traveling from Athens to Vilnius and was diverted to Minsk after a bomb threat, lands at the International Airport outside Vilnius, Lithuania, on May 23, 2021. (Mindaugas Kulbis/AP Photo)
Europe

The pilot of the Ryanair passenger aircraft that was diverted to lank in Minsk, Belarus, was put under covert but “considerable pressure,” Michael O’Leary, the CEO of the Irish airline said on Tuesday.

Ryanair Flight 4978 was on its way to Vilnius, Lithuania, from Athens, Greece, when it was alerted to a bomb threat and diverted to the Belarusian capital on May 23.

According to Belarus’s presidential press service, President Alexander Lukashenko personally ordered that a MiG-29 fighter jet accompany the plane, which was carrying opposition figure Raman Pratasevich, to the airport in Minsk.

Pratasevich, 26, and his girlfriend, 23-year-old Russian student Sofia Sapega, were arrested in Minsk after their landing. Three other passengers also didn’t return to the flight when it was eventually allowed to leave for Vilnius after eight hours.

Speaking to the Transport Committee in the UK’s Parliament, O’Leary said that he sees this incident as “a state-sponsored hijacking.”

“There’s no other way to explain it,” the airline boss said.

O’Leary said Minsk ATC told the pilot that a bomb on board would be detonated if “the aircraft entered Lithuanian airspace or attempted to land at Vilnius airport.”

According to O’Leary, diverted Ryanair flights in that location would normally land in Poland and the other Baltic states, but the captain was put under “considerable pressure” to land in Minsk.

“The pilot was put under—I would say—considerable pressure. Not overtly but covertly, with the suggestion that he really should divert and land in Mink. He wasn’t instructed to do so, but he wasn’t left with any great alternatives.”

O’Leary said that the pilot asked for other alternate diversion airports, but was “only given Minsk.”

He also explained that the pilot “repeatedly” asked Minsk ATC to provide an open line of communication back to Ryanair’s operations control center in Warsaw, but was told, “Ryanair weren’t [sic] answering the phone”, which was “completely untrue.”

O’Leary told the lawmakers that “a number of unidentified persons boarded the aircraft” who were “carrying video cameras” in Minsk, and “repeatedly attempted to get the crew to confirm on video that they had voluntarily diverted to Minsk,” but the crew “refused to confirm that.”

He also added that while passengers and crew were unboarded into a terminal building, the captain remained on board the aircraft but was accompanied by an armed guard every time he left his cockpit.

O’Leary said Ryanair still hasn’t heard from the other passengers who disappeared in Minsk.

“We understand from the security agencies that it is likely that they were three KGB types,” he said.

“Now whether that was Russian KGB or Belarusian KGB, we don’t know. And we’re not sure there’s much of a difference anyway.”

Belarusian ambassador to the UK Maxim Yermalovich was also invited to give evidence to the Parliamentary committee, but he wrote to decline the invitation.

The letter, read out ahead of the evidence session by the committee chair, MP Huw Merriman, said that the embassy had conveyed all relevant information to the British aviation authorities and the Foreign Office right after the incident, including an “explanation of the sequence of events that led to the emergency landing, audio recording, and transcription of radio traffic between the plane’s crew and air controller.”

Yermalovich said these materials proved that “the authorities of Belarus took all necessary measures to ensure the safety of the passengers of flight FR 4978 in full compliance with the international aviation law.”

He went on to say that Belarus is “concerned about the unfortunate decision of the British authorities to suspend Belavia’s permits to operate commercial services from and to the UK,” referring to the national airline of Belarus.

Yermalovich said the sanctions against Belavia went “far beyond the spirit of cooperation and mutual assistance.”

The European Union on June 4 banned Belarus Airlines from flying over European Union territory or having access to its airports, two days after the bloc’s Aviation Safety Agency issued a safety directive saying all EU aircraft should also avoid Belarus air space unless in an emergency.

PA, Reuters, and The Associated Press contributed to this report.