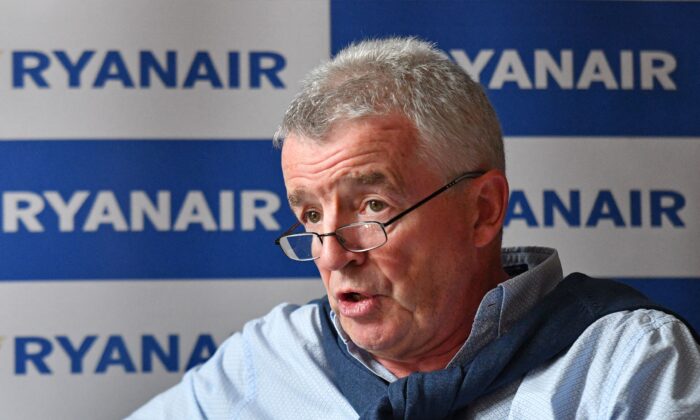 Ryanair CEO Michael O’Leary has said that unvaccinated people should not be allowed to enter hospitals, supermarkets, or travel in airplanes and some other forms of public transport.

In an interview with The Daily Telegraph newspaper, O’Leary said that while he doesn’t agree with mandatory COVID-19 vaccine programs, he does believe that governments should “make life difficult” for those who refuse vaccines without a good enough reason.

Mandatory vaccine programs, enforced by the Occupational Safety and Health Administration, are currently in place in the United States after President Joe Biden in September issued a sweeping set of new rules for employees regarding vaccinations and testing.

The rules are scheduled to take effect on Jan. 4 and dictate that employers with 100 or more employees ensure each of their workers is fully vaccinated or that they test for COVID-19 on at least a weekly basis. All unvaccinated workers must also wear a mask in the workplace.

Health care employees working at facilities participating in Medicare and Medicaid, including hospitals and long-term care facilities, must also be fully vaccinated, which is set to affect more than 17 million workers.

In the United Kingdom, as of April 2022, all National Health Service workers who have “direct contact with patients” will need to have received at least two doses of a COVID-19 vaccine after lawmakers gave the measure the green light last week.

“You can sit at home and you know, get your deliveries of medicines and food. But you should not, you know, go to work or go on public transport unless you have a vaccine certificate,” he said.

The Ryanair CEO noted that while he believes mandatory vaccines would be an “infringement of your civil liberties,” governments could simply “make life so difficult. Or [make it that] there are lots of things that you can’t do unless you get vaccinated.”

O’Leary’s comments come after White House COVID-19 coordinator Jeff Zients warned that unvaccinated individuals are facing a “winter of severe illness and death for yourselves, your families, and the hospitals you may soon overwhelm,” amid the new Omicron variant.

Speaking during a briefing on Sunday, Zients urged people to get vaccinated or receive boosters if they’re eligible, in line with Biden’s rhetoric in recent months.

The new variant of the virus, which causes COVID-19, has seen American schools, businesses, and restaurants shutter their doors while events have been canceled as a precautionary measure as fears surrounding the virus continue to grow.

Meanwhile, governments across the globe have put in place various travel restrictions to stem the spread of the disease, caused by the CCP (Chinese Communist Party) virus.

However, few Omicron-related deaths have been officially confirmed worldwide, and it is still unclear if any have been reported in the United States. The UK has so far reported 12 deaths of people with the new variant, as the government debates on whether or not to tighten restrictions during the Christmas period.

Elsewhere, O’Leary said Ryanair is expecting to fly one million fewer passengers during December due to the latest travel restrictions, which represents a fall of 10 percent.

“If there’s continuing uncertainty over Christmas on further restrictions or some kind of further restrictions, then January will be weak and the forward bookings in Easter and next summer will be weak—so we just don’t know,” he said, adding that the UK and Irish governments are “just trying to lock everybody down for another two weeks up to Christmas.”

“And these restrictions will be removed, but they will effectively have, you know, blocked a lot of people traveling or who are planning to fly over Christmas because they’ve created huge uncertainty and nervousness,” he said.