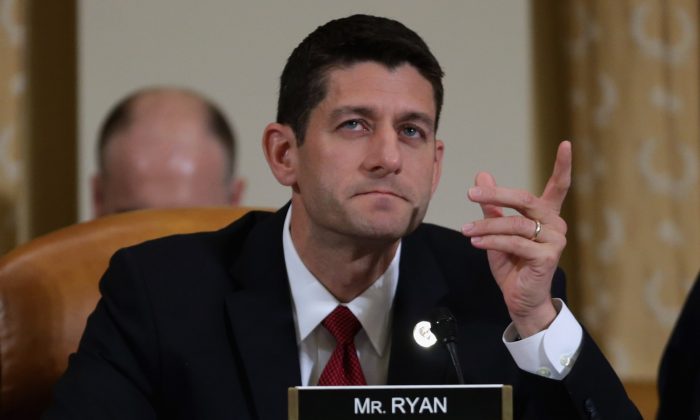 Republicans and the White House will likely cooperate on corporate tax-reform in the coming months, but the tax increases President Barack Obama proposed in his State of the Union Address are unlikely to materialize.

Ways and Means Committee Chair Paul Ryan (R-Wis.) reiterated again on Sunday that he was adamantly opposed to the president’s proposal to raise taxes, especially the estate tax.

“The president has done two big rounds of tax-increases, it’s one of the reasons we have this stagnant economy, he’s practicing yet again envy-economics, and it doesn’t work,” Ryan said on NBC’s Meet the Press.

Ryan said that the economy was in poor shape even though growth is up and the unemployment rate is much lower than two years ago.

“We’re under 3 percent [annual growth], we have tens of millions of people who are not working or looking for work, they’re not even counted in that unemployment statistic,” he said.

Ryan singled out the president’s estate-tax proposal as especially damaging to families businesses.

“The last time that was done, Democrats quickly rescinded it because it destroyed family farms,” Ryan said. “I think it’s a bad idea, you’re making it really hard for families to pass on family businesses to the next generation.”

Both the White House and Republicans have previously floated ideas of lowering corporate taxes while closing select loopholes to streamline the tax-collection process and incentivize more American companies to keep their profits in the United States and not in overseas subsidiaries.

The United States currently has one of the highest corporate tax rates in the world. The White House has proposed changing the maximum rate from 35 percent to 28 percent, but Ryan had previously proposed a 25 percent rate. To discourage companies from keeping their profit in foreign tax havens, the White House proposes an annual 19 percent tax on foreign profits and a one-time 14 percent tax on existing foreign profits.

“We want to look and work with this administration to see if we can find common ground on certain aspects of tax reform, and we want to exhaust that possibility,” Ryan said.

Treasury Secretary Jack Lew, whom Ryan said will discuss corporate-tax reforms with the Ways and Means Committee on Monday, said last week that the president’s proposal of a 28 percent corporate tax would be revenue-neutral after the loopholes are closed.

Ryan also said that he was open to the president’s proposals on the Earned Income Tax Credit and tax-credits for two-income families.