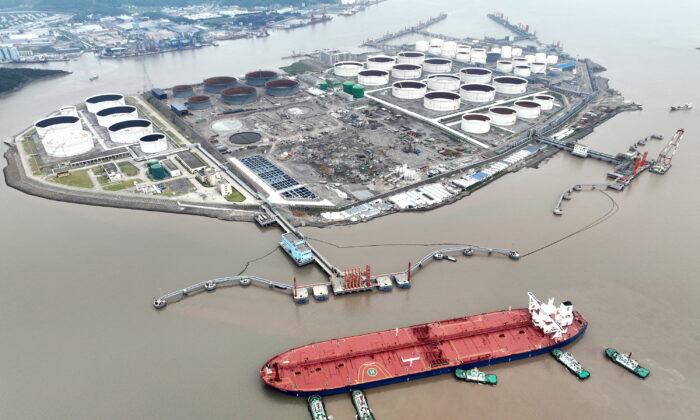 SINGAPORE—China’s crude oil imports from Russia in August surged 28 percent from a year earlier, official data showed on Tuesday, but it handed back its top supplier ranking to Saudi Arabia for the first time in four months.

Emma Li, China analyst with Vortexa Analytics, said actual Russian supplies are likely on par with Saudi shipments at close to 8.5 million tonnes. Several cargoes of Russian Urals crude were reported as originating in Malaysia, according to ship-tracking data she has compiled.

Tuesday’s customs data showed imports from Malaysia, often used as a transfer point in the past two years for oil originating from Iran, Venezuela, and more recently Russia, nearly doubled from a year earlier, to 3.37 million tonnes, or 794,000 bpd, a record high.

China’s purchases from Russia have climbed to reap the benefits of a plunge in European buying as the Ukraine crisis pushes Moscow in search of alternative markets.

Still, imports from Saudi Arabia rebounded last month to 8.475 million tonnes, or 1.99 million bpd, 5 percent above the year ago levels.

Saudi Arabia also remains the biggest supplier on a year-to-date basis, shipping 58.31 million tonnes of oil from January to August, down 0.3 percent on the year, versus 55.79 million tonnes from Russia, which was up 7.3 percent from the year ago period.

The strong Russian purchases continued to weigh on competing supplies from Angola and Brazil, which fell in August by 34 percent and 47 percent year-on-year, respectively.

However, Reuters reported that defense-focused China Aerospace Science and Industry Corp (CASIC) has moved 25 million barrels of Venezuelan crude into China since late 2020, which Chinese customs does not report.

China did not import any crude from the United States, data showed.