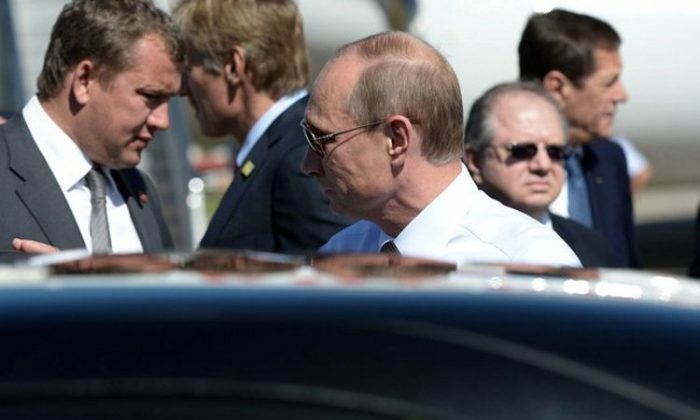 According to business daily Vedomosti this week, Russia will likely start  restricting European airlines use of Russian airspace on routes to and from Asia.  If such “reverse” sanctions on EU and other western airlines are enacted, some experts say the economic fallout on European carriers will be crippling. Western sanctions levied against Russia, in an effort to punish Vladimir Putin over politics, may well prove out the Russian president’s “boomerang” theory on west sanctions.

The news from Russia this morning, Putin has evidently had enough of Washington, UK, and EU economic spears (July 31st EU Sanctions PDF)cast in his direction. Putin has just signed a ban on the import of agricultural goods from countries that have imposed sanctions onto Russia. But restrictions on agricultural imports are really the least problem when compared to industry, in particular travel. Back during the Cold War Russian airspace was closed to East-West routes, just as industrial cooperation was. The point now is, globalization has made us all far more dependent on one another. The west’s insistence on Russia brow beating now affects every country Russia and Russian travelers have had to do with.

In Response to the debrolet Grounding

The widening of sanctions can been seen more clearly looking at the Aeroflot halt on new budget airline Dobrolet because of sanctions specifically targeting the budding Russian airline. Contracts with EU partners to lease Boeing aircraft for routes were rendered invalid by the new sanctions. This nipped in the bud, or so western strategists thought, Aeroflot’s ideas of competing in the budget airfare space in Europe. However harmful the EU sanctions may have appeared to be for Putin’s new airline, two days later Russia engaged China for key electronics to build out their own high tech eco-aircraft.

As for our “boomerang” the Vedomosti report contended Lufthansa, British Airways and Air France, would lose 1 billion euros ($1.3 billion) in only 3 months if a ban is imposed. But the big picture the Russian President has laid out is potentially catastrophic for many EU businesses, not to mention countries dependent on tourism to boost their economies. Russia is Europe’s second largest market for food and drink, and and EU already weighted down in heavy debt and unemployment can scarcely afford to lose ground GDP wise. The food and raw materials export market in the EU lost €12.2 billion a year the moment Vladimir Putin signed this ban.

An array of counter-sanctions in answer to Washington’s and the EU’s onslaught will certainly affect each and every industry in the region, and potentially the world. As evidence of this, Putin just penned a natural gas deal with India in a circumvention US and the EU business restrictions. The Russian leader also signed an oil deal with Iran, further indication of Russian independence potential from the west. Combined with recent BRIC country deals, and Latin American initiatives, it would appear the US, UK, EU, Canada, and Australia stand to lose out more than the Russian coalition.

The now apparent economic war on Russia, has a large number of economists worried. One, Rob Dobson, who is the senior economist at Markit, recently  told The Telegraph:

“The UK manufacturing sector started the third quarter on a firm footing. Although cooling in July, growth rates for production and new orders remain well above their long-run trends, supporting continued solid job creation in the sector.”

Beneath all the political fencing and media manipulation, the business underneath will be staggered by a Russia removed from Europe, detached from North America. This is especially evident in travel and hospitality, where an emergent Russian middle class has bolstered the industry by visiting Spain, Greece, Italy, and others among EU countries otherwise in dizzying debt. Outside the hotels and restaurants that will lose Russian customers, the aircraft manufacturers, tour operators, and supply chain businesses that support travel will all be affected negatively.

Finally, these controversial sanctions on Russia of late may have much farther reaching implications. Bloomberg’s Rachel Evans reported:

“U.S. and European Union sanctions against Russia threaten to hasten a move away from the dollar that’s been stirring since the global financial crisis.”

Of course these larger implications are complex, as well as far reaching. But for the small and medium sized businesses out there, especially in tourism, more sanctions are not helping anyone in the day to day. In Germany 25,000 jobs are now at risk, and many big ticket deals have been cancelled across the EU, but the real damage done by this “sanction fencing” will come to the countries that can least afford damage. Bulgaria, Romania, Greece, Hungary, Albania, Croatia, Portugal, and other smaller economies. Thousands of Russian travelers were stranded in Greece by this week’s bankruptcy of a leading Russian tour company alone. European stocks are already trading lower this morning. Frankfurt Airport, as an indicator for all Europe hubs, has cut their retail outlook on account of the Russia sanctions.

Those Who Can Least Afford Economic War

The political and strategic football field Ukraine has become, has the potential to spell catastrophe for many industry projections. In particular, Europe travel bears special scrutiny for tourism’s part in the overall economy of many. As further evidence, this  (PDF) U.S. Commerce Department report from yesterday tells of the double edged nature of these sanctions. According to the study US experts plummeting by 34% reaching the lowest level in a year. This kind of negative activity is only projected to get worse for all “sanctioning” partners associated with global trade with Russia.

Let’s hear your thoughts on these international economic trends.