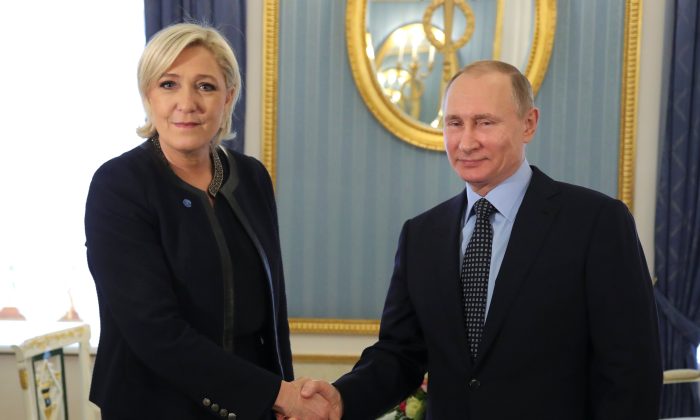 MOSCOW—President Vladimir Putin met French National Front leader Marine Le Pen in the Kremlin on Friday, handing her a potential boost to her campaign to win next month’s presidential election in France.

Putin told Le Pen Moscow reserved the right to meet any French politician it wanted and that she represented “quite a fast-growing element of European political forces.”

“Of course I know that the election campaign in France is actively developing,” said Putin. “We do not want to influence events in any way, but we reserve the right to talk to representatives of all the country’s political forces.”

A meeting with Putin is a coup for Le Pen and could help her burnish her foreign policy credentials. While increasingly popular in France, she has struggled to get any backing abroad apart from support offered by other conservative parties.

Dmitry Peskov, Putin’s spokesman, told reporters on a conference call that Putin and Le Pen had not discussed the possibility of Russia offering any financial help to her political party.

Le Pen, who has said she admires the Russian leader, was visiting Russia at the invitation of Leonid Slutsky, head of the lower house of parliament’s foreign affairs committee.

Earlier on Friday, Le Pen had cut short a schedule of events in the Russian parliament to meet Putin.

Reporters had been told she would give a news conference at the State Duma, the lower house of parliament, after meeting Russian lawmakers, but she did not turn up for the event at the designated time.

On Friday morning, Le Pen explained to Russian parliamentarians why she opposed European Union sanctions imposed on Moscow over its role in the Ukraine crisis.

She also said that Russia and France needed to unite to fight global terrorism, a sentiment later echoed by Putin who has long advocated teaming up with the West to take on the ISIS terrorist group.