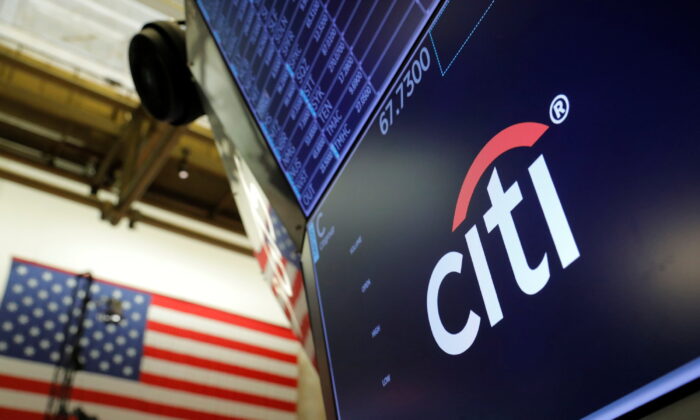 The logo for Citibank is seen on the trading floor at the New York Stock Exchange (NYSE) in Manhattan, New York City, on Aug. 3, 2021. (Andrew Kelly/Reuters)
Economic Policies

Russia is replacing Citibank, which has stopping servicing the country’s Eurobonds, with its own National Settlement Depository, the finance ministry said on Thursday, as it risks its first major external debt default in over a century.

Sanctions imposed by Western countries and their allies on Russia after it started what it calls a “special military operation” in Ukraine on Feb. 24 have all but excluded the country from the global financial system.

The lapse last month of a key U.S. licence allowing Russia to make payments put the prospect of the country defaulting back into focus.

But Russia says it has cash and is willing to pay, refusing any talk of default. Finance Minister Anton Siluanov said on Monday that Moscow would continue to service its external debts in rubles.

On Thursday, the finance ministry said Citibank stopped acting as the fiscal, transfer, and paying agent as well as the registrar from May 24 on four Eurobond issues maturing in 2023, 2028, 2042, and 2043.

“The function of the paying agent and other functions for the indicated bond issues were transferred to National Settlement Depository in accordance with the law of the Russian Federation,” the finance ministry said.

Russia is now considering paying Eurobond holders by applying the mechanism it uses to process payments for its gas in rubles.

The finance ministry also said on Thursday that a delay in payments on its Russia-2022 Eurobond that were due on April 4 was solely caused by “unlawful actions” of foreign financial intermediaries.

It said it was ready to consider and, if necessary, settle bilaterally all claims regarding its debt obligations on the Russia-2022 Eurobond.