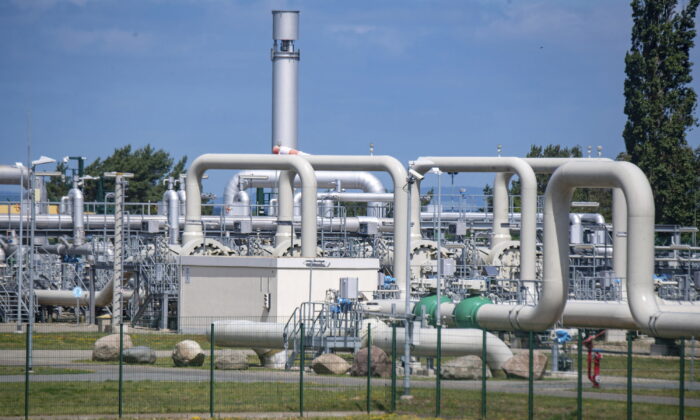 Pipe systems and shut-off devices at the gas receiving station of the Nord Stream 1 Baltic Sea pipeline and the transfer station of the OPAL long-distance gas pipeline in Lubmin, Germany, on June 21, 2022. (Stefan Sauer/AP)
Europe

Russian state-owned energy corporation Gazprom has scrapped plans to restart gas flows through its Nord Stream 1 pipeline to Germany, offering no answers as to when operations would resume back to normal.

On Aug. 19, Gazprom announced that it would stop gas flows through the pipeline between Aug. 31 and Sept. 2 due to routine maintenance. On Aug. 31, the company said that the temporary shutdown will only last for three days. Normal operations were due to resume at 0100 GMT on Saturday. But on Friday, Gazprom said that it could not safely restart gas deliveries as an oil leak in a critical turbine was not yet fixed. It is unknown when gas supplies would be resumed.

Gazprom’s claims were countered by Siemens Energy, which usually services the turbines on Nord Stream 1. “Such leaks do not normally affect the operation of a turbine and can be sealed on site. It is a routine procedure within the scope of maintenance work,” the company said, according to Reuters.

Siemens also said that the station where the leak was discovered has other turbines that should help Nord Stream 1 to continue operating. The company is currently not contracted to conduct maintenance work on the pipeline but is on standby if the need arises.

“Gazprom’s announcement this afternoon that it is once again shutting down NorthStream1 under fallacious pretenses is another confirmation of its unreliability as a supplier. It’s also proof of Russia’s cynicism, as it prefers to flare gas instead of honoring contracts,” European Commission spokesperson Eric Mamer said in a Sept. 2 post on Twitter.

During a speech at the United Nations General Assembly in Sept. 2018, former President Donald Trump had warned about Germany’s dependence on Russian energy.

“Reliance on a single foreign supplier can leave a nation vulnerable to extortion and intimidation,” Trump said. At the time, many German officials had dismissed the warning.

Heiko Mass, a member of the left-wing Social Democratic Party of Germany who was in the German delegation at the time, was reportedly laughing and shaking his head at Trump’s comments. Four years later, the former president’s warning has proven to be correct.

Roughly 27 percent of Germany’s overall energy mix is accounted for by natural gas. Prior to the Russian invasion of Ukraine, more than 55 percent of German gas consumption was sourced from Russia.

On Aug. 29, gas prices in Germany broke through the $1,000 per megawatt-hour level for the first time ever. Chancellor Olof Scholz has announced plans to cut down the value-added tax on natural gas from 19 percent to 7 percent.

According to an IMF estimate made in July, a complete shutdown of remaining Russian gas supplies would trigger a 3 percent decline in German GDP next year and increase inflation significantly.

Berlin has committed to cut down gas consumption by 15 percent between Aug. 2022 and March 2023 to deal with rising gas prices and supply shortages.