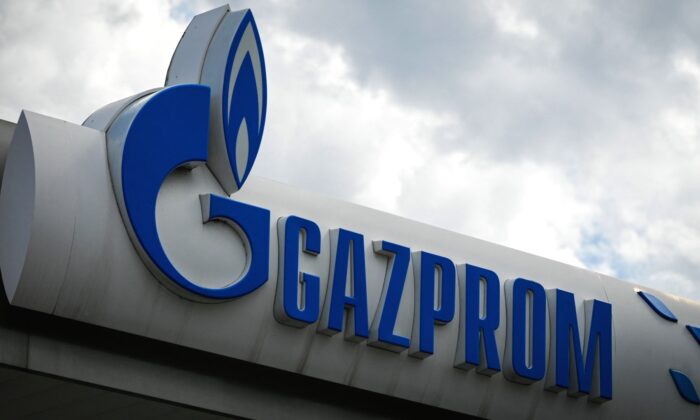 The logo of Russia's energy giant Gazprom is pictured at one of its petrol stations in Sofia, Bulgaria, on April 27, 2022. (Nikolay Doychinov/AFP via Getty Images)
Commodities

Russia’s Gazprom has cut off gas supplies to Dutch gas trader GasTerra after it had failed to comply with requirements to pay for deliveries in Russian rubles.

GasTerra said in a statement on May 30 that it has “decided not to comply with Gazprom’s one-sided payment requirements.”

Russian President Vladimir Putin issues a decree in March stating that from now on, Russian gas would have to be paid for in rubles, meaning that nations wanting to purchase gas would have to open both a euro and a ruble account with Gazprombank in Moscow.

“GasTerra will not go along with Gazprom’s payment demands,” the partially state-owned company said. “This is because to do so would risk breaching sanctions imposed by the E.U. and also because there are too many financial and operational risks associated with the required payment route.”

“In particular, opening accounts in Moscow under Russian law and their control by the Russian regime pose too great a risk for the Groningen company.”

As a result, Gazprom declared that it will discontinue supplies of gas to GasTerra, based in the northern Dutch city of Groningen, effective May 31.

The company added that the cut-off means that Gazprom will not deliver some 2 billion cubic meters of gas between now through Oct. 1, the date the supply contract ends.

However, it noted that it has anticipated this and made alternative arrangements by buying gas from other providers.

“The European gas market is highly integrated and extensive,” GasTerra continued. “However, it is impossible to predict how the lost supply of 2 billion m3 (cubic meters) of Russian gas will affect the supply/demand situation and whether the European market can absorb this loss of supply without serious consequences.”

Gazprom confirmed on Tuesday that it had not received payments in Russian rubles from GasTerra for gas supplied in April.

“Payments for gas supplied from April 1 must be made in rubles using the new bank details, about which the counterparties were duly informed,” Gazprom said.

Russia, one of the world’s largest producers of oil and natural gas, has already cut off gas supplies to Poland, Bulgaria, and Finland after the nations refused to make payments in line with Putin’s order.

The latest cut to GasTerra comes as European Union leaders agreed on a plan to block roughly 90 percent of oil imports from Russia to the E.U. by the end of the year.

European Commission President Ursula von der Leyen called the move an “important step forward” and vowed to soon return to the issue of the remaining 10 percent of pipeline oil.

The ban will only cover oil that arrives by sea but not pipeline oil, following opposition from Hungary.