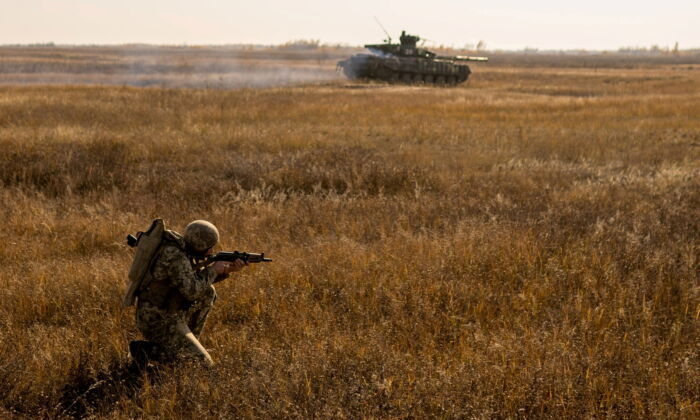 A serviceman of the Ukrainian Armed Forces takes part in military drills at a training ground near the border with Russian-annexed Crimea in Kherson region, on Nov. 17, 2021. (Press Service of General Staff of the Armed Forces of Ukraine/via Reuters)
Thinking About China

Russian-Ukraine Conflict: A Distraction From Taiwan

While tension is growing between Washington and Moscow over a potential Russian invasion of Ukraine, it remains unclear which side China will support.

As China has trade and investment relations with all three countries and the European Union, it is possible that Beijing will not get involved. However, the Chinese regime could use Ukraine as a distraction to capture Taiwan.

Since 2014, Russian leaders have been citing historical and cultural reasons why they believe Ukraine belongs to Russia. Leading up to the 30th anniversary of the fall of the Soviet Union, President Vladimir Putin and former President Dmitry Medvedev published papers, claiming Russian dominion over Ukraine.

Belarus and Ukraine serve as buffer zones between Russia and NATO. Consequently, Russia opposes Ukraine’s entry into NATO, which they see as a security concern.

A White House representative said at a press briefing on Dec. 6 that Russia has moved battalion-sized tactical groups to the Ukraine border. And various media reported the number of Russian soldiers to be around 100,000 troops.

The senior official said that the United States would send troops if Eastern European allies requested, but that sanctions were the preferred means of addressing this challenge. U.S. military resources are focused on countering China in the Indo-Pacific, and the Pentagon would prefer not to face wars on two fronts.

The wildcard in this potential three-way conflict is China. The question is: does China have enough significant business with Ukraine to intercede on its behalf? Or would China take Russia’s side, pitting the United States, NATO, and EU against the number two and number three military powers on Earth?

Ukrainian President Volodymyr Zelensky has said that his country’s relationship with Beijing provided China businesses with a “bridge to Europe.” Ukraine is a member of the Belt and Road Initiative (BRI, also known as “One Belt, One Road”) and has partnered with China on infrastructure programs, including building airports, roads, and railways. Ukraine has remained silent on genocide against Uyghur Muslims in Xinjiang, even removing its name from a multilateral European document that condemns China’s human rights violations.

China is Ukraine’s largest trading partner and with a bilateral trade of $15.4 billion, accounting for 11 percent of Ukraine’s GDP in 2020. Ukraine exports raw materials to China while running a tremendous trade deficit, importing finished products and technology. Chinese investment in Ukraine has been extremely small, with $47 million coming from the mainland and $60 million from Hong Kong. Numerous projects announced by Beijing never actually took place. The existing investments did not add value to Ukraine’s economy.

Ukraine’s inability to meet good governance requirements, such as anti-corruption measures and de-oligarchization, precludes the country from borrowing from traditional lenders. As a result, Ukraine turned to China. Loans from Beijing generally come with political strings, but no requirements for the improvement of democracy. Although the loans are opaque, it is believed that Ukraine recently borrowed $400 million from China. This is in addition to $372 million borrowed in 2011 as well as $1.5 billion borrowed in 2012 from the Exim Bank of China.

China’s economic engagement with Russia is, of course, much greater. In 2020, Chinese direct investment in Russia exceeded $12 billion. China is Russia’s largest trading partner in both imports and exports, with total trade reaching $108 billion in 2020. The two countries are committed to increasing this number to $200 billion over the next four years. China is the world’s largest oil importer. Russia is China’s second largest oil exporter with 2020 sales totaling $23.8 billion and 2021 exports exceeding $36 billion.

Russia is a member of the Shanghai Cooperation Organization (SCO) and the BRI. Both China and Russia are part of BRICS, which is an acronym for the combined economies of Brazil, Russia, India, China, and South Africa. Furthermore, Russia and China recently renewed a 20-year-old friendship treaty. The two countries have held joint military exercises and patrols, but do not have a formal mutual defense agreement.

China’s trade relationship with the United States totaled $560 billion in 2020, with America running a tremendous trade deficit with China. In addition to trade, the two countries are major investment partners. In 2020, U.S. investment in China totaled $123.9 billion. In the same year, China invested $38 billion in the United States. America is also among China’s top 10 sources of oil, exporting over $6 billion in 2020.

Some observers believe that if war breaks out over Ukraine, Beijing would not intercede on Kiev’s behalf. After Russia annexed the Crimea in 2014, Beijing and Moscow agreed to the construction of the Russia-to-China Power of Siberia natural gas pipeline, suggesting that the Chinese Communist Party (CCP) is not willing to fall on its sword for Ukraine.

On the other hand, siding with Russia against Ukraine would damage China’s relationship with the EU. China’s 2020 trade with the EU exceeded $586 billion and investment totaled $7.4 billion. Moving forward, it appears the CCP wants to to increase its economic engagement with Europe.

Another possibility is that the CCP is waiting for the United States to be tied up with a military conflict in Europe, before launching an attack on Taiwan. Russia would be a formidable foe for the United States to fight—and waging a war against both China and Russia would be a destructive course to take. Consequently, if China remained out of a potential U.S.-Russia conflict, it is possible that the Biden administration would not move to prevent China from taking Taiwan, as that would mean a very destructive war on two fronts against the world’s largest military powers.

If the United States allowed itself to be sucked into a military conflict in Europe, the administration may lack the resolve to simultaneously engage China in the Pacific.