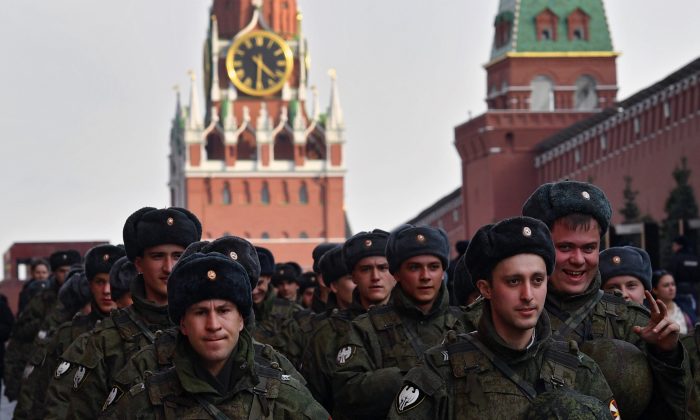 Russian servicemen walk towards Manezhnaya Square ahead of a rally against terrorism in central Moscow on April 6, 2017 following April 3 blast in the Saint Petersburg metro. (Natalia Kolesnikova/AFP/Getty Images)
Europe

MOSCOW—Russian authorities said on Saturday security forces had killed two armed militants who had been trained by Islamic State and were planning a series of “terrorist crimes,” Russian news agencies reported.

The National Anti-Terror Committee said the two men had been killed in the Stavropol region of Southern Russia after a shoot out with security forces who had tried to stop their car.

“The bandits have been preliminarily identified: one was the leader of a cell, trained in Islamic State camps and returned to Russia to carry out terrorist acts. The other was an active cell member,” Interfax news agency quoted the committee as saying.

Russia has been on heightened alert after a suicide bomber killed 16 people in an attack on the St Petersburg metro earlier this month.

Russia’s Federal Security Service said on Friday a gunman had burst into one of its regional offices in the far east of the country and opened fire, killing one of its employees and a visitor.