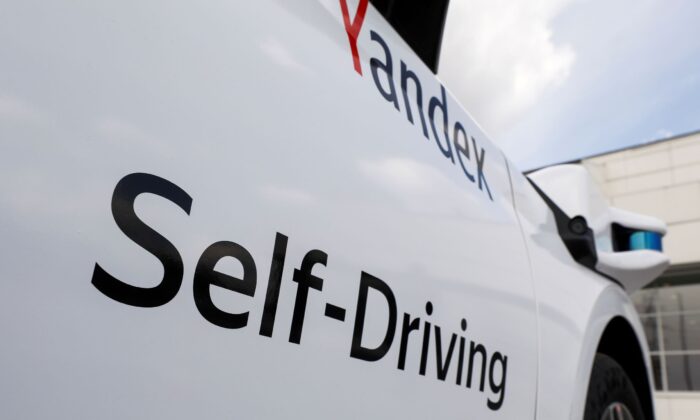 A self-driving car developed by Yandex in cooperation with Hyundai is seen during at event in Moscow, Russia, on May 27, 2020. (Shamil Zhumatov/Reuters)
Tech

MOSCOW—Adventurous Muscovites may soon be able to travel around parts of Moscow in driverless taxis as Russian tech giant Yandex plans to start testing the autonomous vehicles in the city this year, the company said on Wednesday.

Yandex, which operates a raft of services from online search to food delivery, has been testing self-driving technology for more than three years in Russia, Israel, and the United States.

Robotaxis will be available through the company’s Yandex.Go application in one Moscow district for certain customers, Yandex said in a statement.

“The launch in Yasenevo is the first stage of a large Yandex project to launch driverless taxis,” the company said. “Over time, there will be more cars, the number of locations you can go to and from will increase, and ever more people will be able to hail driverless taxis.”

Russian legislation does not yet allow driverless vehicles to travel without a person at the wheel, except in special economic zones, such as the city of Innopolis in the Tatarstan region.

Restrictions on their use in certain areas of large cities could be partially lifted after a law came into force this year.

Yandex’s fleet of around 170 driverless cars has traveled more than 14 million kilometers (8.7 million miles). The company also has self-driving robots for food delivery, which already operate on some U.S. college campuses through a partnership with online food-ordering company GrubHub.

Yandex owns a 73 percent stake in Yandex Self-Driving Group (SDG) and has agreed to buy the remaining share from Uber by the end of the year.