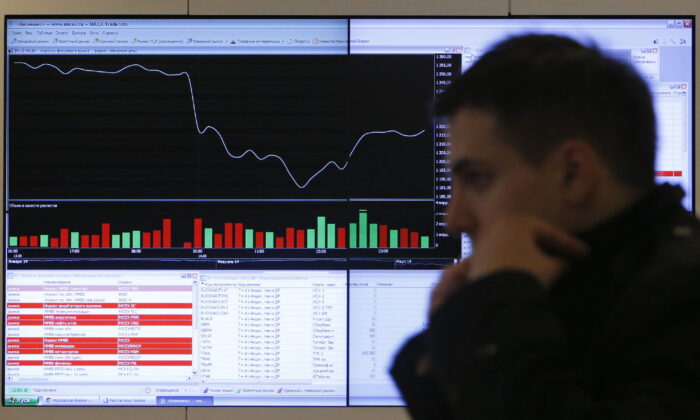 File photo showing a man walking past an information screen on display inside the office of the Moscow Exchange in Moscow on March 14, 2014. (Maxim Shemetov/Reuters)
Stocks

Russian stocks plummeted on Thursday and the country’s currency sank against the dollar to its lowest level on record, prompting Russia’s central bank to announce emergency support measures, as news of the long-anticipated Russian military action against Ukraine hit headlines.

In a televised address, Russian President Vladimir Putin announced a “special military operation” in Ukraine that he claimed was meant to protect civilians and demilitarize Ukraine, but which Western leaders denounced as a baseless act of aggression.

President Joe Biden late Wednesday issued a statement saying that Putin “has chosen a premeditated war that will bring a catastrophic loss of life and human suffering.”

“The prayers of the entire world are with the people of Ukraine tonight as they suffer an unprovoked and unjustified attack by Russian military forces,” Biden said.

Following Putin’s announcement, there were reports that Russian forces fired missiles at several Ukrainian cities, landed troops on its south coast, and that tanks and other military vehicles rolled into Ukraine from Russia-aligned Belarus.

The Russian Defense Ministry said it had struck Ukrainian military assets with precision strikes and wasn’t targeting populated areas, claiming that “there is no threat to civilian population.”

Sberbank led the declines, down 45.9 percent by 5:47 a.m. New York time, followed by EN+ Group International PJSC, an aluminum and power producer, which was down 40.5 percent. Russian gas giant Gazprom was down 34.4 percent.

The selloffs prompted the MOEX exchange to announce a halt to trading, which was resumed several hours later.

The Russian currency crashed to a new all-time low, falling to as low as 89.98 against the U.S. dollar, though by 5:51 a.m. New York time it had recovered some ground and was trading at 84.5 versus the greenback.

“To stabilize the situation on the financial market, the Bank of Russia decided to start interventions in the foreign exchange market … and conduct operations today to provide additional liquidity to the banking sector,” the central bank said in a statement.

It added that it was poised to deploy “all necessary tools” to maintain business continuity and guard against financial instability.

News of the invasion sparked a hunt for safe havens, with investors around the world dumping equities in favor of gold and U.S. government securities.

Spot gold prices jumped over 3 percent to around $1,970 an ounce, while the benchmark 10-year U.S. Treasury yields fell around 12 basis points to 1.853 percent. Treasury yields move in the opposite direction to prices.