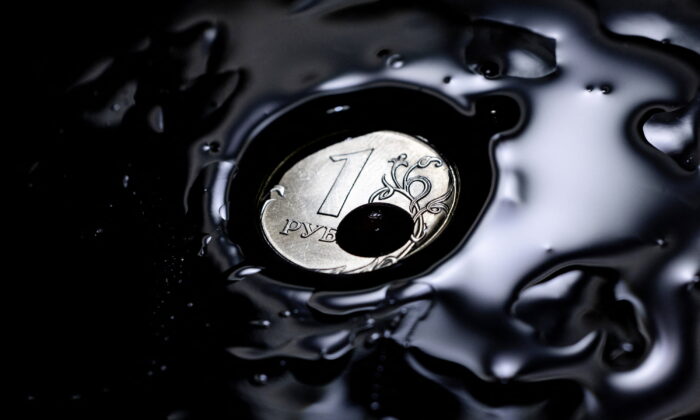 A Russian one ruble coin is seen in this picture illustration taken on April 5, 2022. (Maxim Shemetov/Illustration/Reuters)
Stocks

The Russian ruble firmed past 77 to the dollar in volatile trade on Wednesday, while stock indexes reversed earlier losses as the market watched developments around Ukraine and sanctions against Russia.

The country’s economy faces soaring inflation and capital flight after the West imposed tough sanctions against Moscow for sending tens of thousands of troops into Ukraine on Feb. 24.

On Tuesday, the central bank slightly relaxed capital controls for export-focused companies outside the commodities and energy sectors, extending the deadline by which they need to convert foreign currency to rubles to 60 days from three days.

The central bank’s move could result in a slight decline in market activity, but excessive FX supply remains in place, Promsvyazbank analysts said in a note.

The ruble will also find support from a record 3 trillion rubles ($39.1 billion) companies are due to pay in taxes this month, for which some export-focused firms need to sell foreign currency, according to analysts surveyed by Reuters.

“We think it could reach 75 (to the dollar) next week, as oil and gas exporters will be actively selling FX,” Sberbank CIB said.

On the bond market, where non-residents have not been allowed to sell paper since late February, yields on 10-year benchmark OFZ bonds fell to 10.16 percent, their lowest since Feb. 21, from around 11.6 percent seen a week ago. Yields move inversely with bond prices.

Bonds are driven by expectations that the central bank will consider cutting its key interest rates from 17 percent as soon as April 29.

Russian stock indexes were mixed after rapid swings from losses to gains.

The dollar-denominated RTS index was up 2 percent at 950.1 points. The ruble-based MOEX Russian index shed 0.2 percent to 2,312.8 points.

Shares in Russia’s largest lender Sberbank and VTB outperformed the market, gaining around 0.4 percent and 0.1 percent, respectively, after the central bank has said it will not publish banks’ financial statements on its website until October.