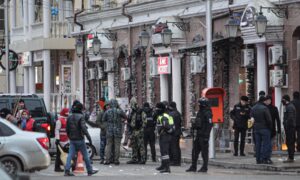 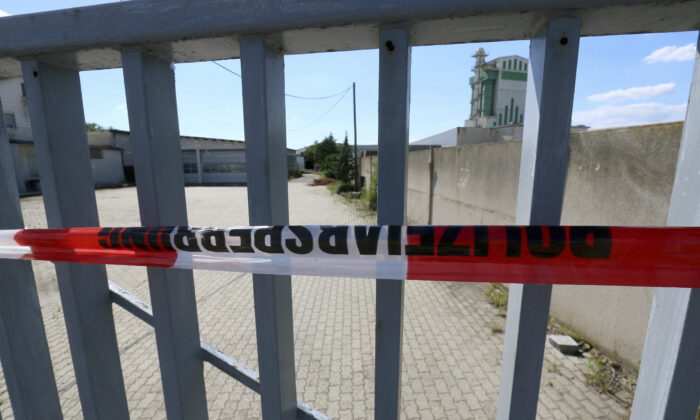 The property where a man was shot dead, is sealed off with police tape in Gerasdorf, Austria, on July 5, 2020. (Ronald Zak/AP Photo)
Europe

Russian on Trial in Austria Over Execution-Style Killing

BERLIN—A Russian man went on trial Friday in Austria over the execution-style shooting death of a 43-year-old Chechen in a Vienna suburb last year.

Prosecutors were unable to determine whether the killing was politically motivated or resulted from an argument the men had over a gun deal, Austrian public broadcaster ORF reported.

Members of the Chechen exile community in Austria said the victim of the July 2020 slaying might have been targeted for criticizing the authoritarian leader of Russia’s Chechnya region, Ramzan Kadyrov.

A defense lawyer has said the man on trial, who is also an ethnic Chechen, did not carry out the shooting at an industrial estate in Gerasdorf, northeast of Vienna, blaming the victim’s bodyguard instead, ORF reported.

The victim was shot six times, including once in the head from a short distance, prosecutors said.

The trial is taking place in Korneuburg amid heightened security measures. The defendant, who wasn’t named for privacy reasons, could face life imprisonment if convicted of murder.

There have been several attacks on Chechens abroad in recent years.

Another Russian man is on trial in Germany over the brazen daylight killing in Berlin of an ethnic Chechen from Georgia in 2019. The victim had fought Russian troops in Chechnya and fled to Germany in 2016. Prosecutors said the suspect had been tasked with the killing by Russian authorities.

In February last year, Imran Aliyev, who ran a YouTube channel criticizing Kadyrov, was found stabbed to death in a hotel in Lille, France. That same month, another Chechen dissident, Tumru Abdurakhmanov, was attacked in Sweden.