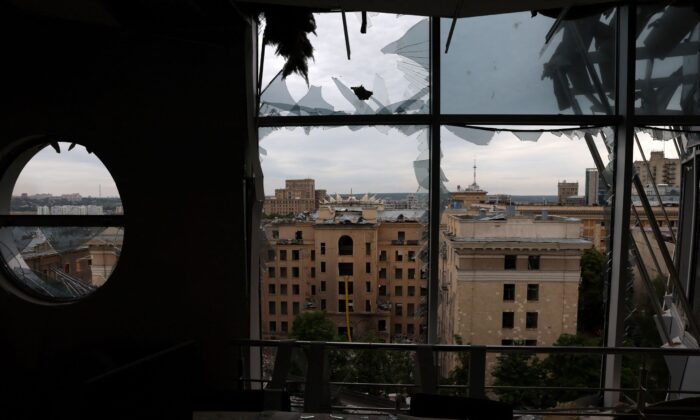 The skyline of the city centre can be seen through a destroyed office building that was hit by shelling, the area hadn’t been hit in weeks, in Kharkiv, Ukraine, on June 25, 2022. (Leah Millis/Reuters)
Russia-Ukraine War

KYIV—Russian missiles rained down across Ukraine on Saturday, hitting military facilities in the west and the north as well as a southern city.

Russian artillery and air strikes pounded the twin cities of Sievierodonetsk and Lysychansk in the eastern Luhansk region on Friday, smashing into a chemical plant where hundreds of civilians were said to be trapped, a Ukrainian official said on Saturday.

Ukraine said on Friday its troops had been ordered to retreat from Sievierodonetsk as there was very little left to defend after weeks of intense fighting, marking the biggest reversal for Ukraine since losing the port of Mariupol in May.

News of the withdrawal came four months to the day since Russian President Vladimir Putin sent tens of thousands of troops over the border.

The latest Russian advances appeared to bring Moscow closer to taking full control of Luhansk, one of Putin’s objectives, and sets the stage for Lysychansk to become the next main focus.

Vitaly Kiselev, an official in the Interior Ministry of the separatist Luhansk People’s Republic—recognized only by Russia—told Russia’s TASS news agency that it would take another week and a half to secure full control of Lysychansk.

“There was an air strike at Lysychansk. Sievierodonetsk was hit by artillery,” Gaidai said on the Telegram messaging app, adding that the Azot chemical plant in Sievierodonetsk and the villages of Synetsky and Pavlograd and others has been shelled.

He made no mention of casualties at the Azot plant and Reuters could not immediately verify the information. Gaidai said 17 people had been evacuated on Friday from Lysychansk by police officers, rescuers, and volunteers.

Kharatin Starskyi, the press officer of a Ukrainian National Guard brigade, said on television on Saturday that the flow of information about the withdrawal from Sievierodonetsk had been delayed to protect troops on the ground.

“During the last (several) days, an operation was conducted to withdraw our troops,” Starskyi said.

British Prime Minister Boris Johnson said on Saturday that he feared Ukraine could face pressure to agree a peace deal with Russia. Johnson said the consequences of Putin getting his way in Ukraine would be dangerous to international security and a long-term economic disaster.

On Saturday, Russia again fired missiles at military and civilian infrastructure in the north near Ukraine’s second-biggest city Kharkiv through to Sievierodonetsk in the east, said the General Staff of Ukraine’s Armed Forces.

The governor of Lviv region in western Ukraine, Maxim Kozytskyi, said in a video posted online that six missiles were fired from the Black Sea at the Yavoriv base near the border with Poland. Four hit the target but two were destroyed.

Vitaliy Bunechko, governor of the Zhytomyr region in the north of the country, said strikes on a military target killed at least one soldier.

“Nearly 30 missiles were launched at one military infrastructure facility very near to the city of Zhytomyr,” said Bunechko, claiming that nearly 10 missiles had been intercepted and destroyed.

In the south, Oleksandr Senkevych, mayor of Mykolaiv near the Black Sea, said five cruise missiles hit the city and nearby areas on Saturday. The number of casualties is being clarified.

Ukraine on Friday again pressed for more arms, with its top general, Valeriy Zaluzhniy, telling his U.S. counterpart in a phone call that Kyiv needed “fire parity” with Moscow to stabilize the situation in Luhansk.

South of Sievierodonetsk, Ukrainian soldiers also withdrew from the towns of Hirske and Zolote in the face of overwhelming Russian forces, said Oleksiy Arestovych, an adviser to Ukrainian President Volodymyr Zelenskyy.

Ukraine’s foreign minister played down the significance of the possible loss of more territory in the Donbass.

“Putin wanted to occupy the Donbas by May 9. We are (there) on June 24 and still fighting. Retreating from a few battles does not mean losing the war at all,” Dmytro Kuleba said in an interview with the Italian newspaper Corriere della Sera.

The war has had a massive impact on the global economy and European security arrangements, driving up gas, oil, and food prices, pushing the EU to reduce its heavy reliance on Russian energy, and prompting Finland and Sweden to seek NATO membership.

The West has imposed an unprecedented package of sanctions on Russia, its top companies, and its business and political elite in response to Moscow’s invasion of Ukraine.

In a major sign of support, European Union leaders this week approved Ukraine’s formal candidature to join the bloc—a decision that Russia said on Friday amounted to the EU’s “enslaving” of neighboring countries.

By Max Hunder and Tom Balmforth