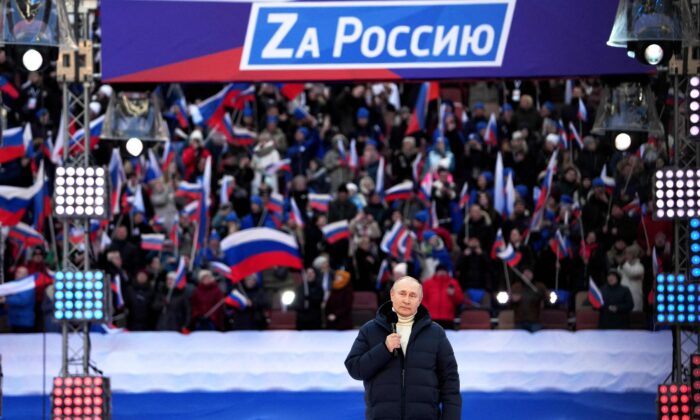 Russian President Vladimir Putin gives a speech during a concert marking the eighth anniversary of Russia's annexation of Crimea at the Luzhniki stadium in Moscow, on March 18, 2022. (Alexander Vilf/Pool/AFP via Getty Images)
Canada

Russian Disinformation a Threat but Censorship Not the Cure, House Committee Hears

The impact of Russian disinformation on Canada was discussed during a House committee on April 5, with academics weighing in on the nature and scope of the phenomena. They didn’t all agree on its importance, but cautioned that government censorship could actually backfire by eroding trust in institutions.

“In terms of disinformation, I’m not one who believes that Russian disinformation, or Chinese, or anyone’s disinformation campaigns really have much of an effect at all. I think that’s highly overblown and exaggerated,” said James Fergusson, deputy director of the Centre for Defence and Security Studies at the University of Manitoba.

Fergusson and other professors were testifying before the Standing Committee on Public Safety in the context of its assessment of Canada’s security posture in relation to Russia.

Fergusson opened his remarks by telling the committee the government should not overreact or panic regarding Canada’s vulnerabilities vis-à-vis Russia.

“Certainly the war has heightened the attention, but as I would argue to you, these vulnerabilities have been here for a long time now and we need to recognize, given the relationship, the adversarial relationship that exists between Russia and Canada, Russia and the West, that this is not a new Cold War,” he said.

Robert Huebert, political science professor at the University of Calgary, took a different stance, calling Russia an “existential threat” to Canada, and saying he was preoccupied by its information activities.

“I am more concerned about the weaponization of social media [as opposed to Fergusson]. I do think that the Russians in terms of some of the evidence that our American and British allies have shown are of course problematic,” Huebert said in reference to Russian interference in political processes.

“So ultimately, we are facing a threat from Russia. It is growing, and it is reaching the level of an existential crisis.”

Veronica Kitchen, political science professor at the University of Waterloo, brought up the Freedom Convoy protest and while saying Russian disinformation was not behind it, she considers it an example of how it can have an impact.

“The political action of supporters of populist extremism can also have harmful effects that don’t escalate to the level of security threat crime,” she said.

“I want to be very clear that I’m not suggesting that the trucker convoy was a product of Russian misinformation … but these are examples of the kinds of effects that are threats to human security exacerbated by Russian disinformation.”

The Freedom Convoy sought to obtain the lifting of all COVID-19 restrictions, with organizers saying their movement is grassroots-based and is only seeking to uphold fundamental freedoms, and insisting that they are committed to peaceful demonstration. Participants remained non-violent during the police clearing operation that employed force on the weekend of Feb. 18.

“These movements are just organic. They pop up where people want to get up and do something because they’re fed up after two years of being treated like this,” Tom Marazzo, a spokesperson for Freedom Convoy, said in Ottawa on Feb. 20.

In late January, the CBC had suggested Russia could be behind the protest movement and later had to retract. Crowdfunding platform GoFundMe, which hosted a fundraiser for the Freedom Convoy for a time, told a House committee on March 17 that Russia played no role in the financing.

The Liberal government has taken a stance similar to Kitchen’s on the Freedom Convoy, and the fight against “misinformation” and “disinformation” has featured prominently in many of Prime Minister Justin Trudeau’s recent public addresses.

The government is introducing three pieces of legislation to regulate and curate the information space: Bill C-11 (amending the Broadcasting Act), Bill C-18 (the Online News Act), and a yet to be presented bill aimed at more specifically reducing “online harms.”

Conservative MP Dane Lloyd asked the panel about the issue of misinformation and associated calls for censorship, and whether it would be more effective to fight misinformation with true information.

“Do you think that would backfire if the government were to engage in censorship?” he asked.

“Definitely, it’s going to backfire. As I’ve said, I don’t agree that disinformation campaigns—and they’re not all coming from Russia, and issues about our information campaigns as well—have that much of a significant impact in terms of exploiting social differences,” replied Fergusson.

“I think certainly providing true information is always a good strategy, but for true information to be effective, it has to come from institutions that people trust. And so maintaining that trust in institutions, through transparency … is vitally important,” said Kitchen.

“And would censorship undermine trust in those institutions?” followed up Lloyd.

The issue of what constitutes “disinformation” is controversial, with Fergusson saying that “one person’s disinformation is another person’s truth.”

While Russia is known to use all kinds of means in the information space to advance its interests, the label of “Russian disinformation” has also been slapped on authentic information that is damaging to power centres.

When the New York Post reported on Hunter Biden’s laptop before the U.S. presidential election, former intelligence officials published a letter saying it was “Russian disinformation,” and this claim was carried across media outlets opposed to former President Donald Trump.

U.S. President Joe Biden also said it was “Russian disinformation” during a presidential debate with Trump.

The New York Post was suspended from Twitter and other Big Tech platforms actively suppressed the story.

Major newspapers like The New York Times and The Washington Post, which initially went along with the refrain, recently admitted the laptop of the president’s son was in fact real and not disinformation.

A Media Research Center poll conducted after the November 2020 election suggested that 16 percent of Biden voters would not have voted for him had they known about the FBI’s investigation into the laptop, which shows potential involvement in tax fraud, money laundering, and foreign lobbying crimes, according to the New York Post.