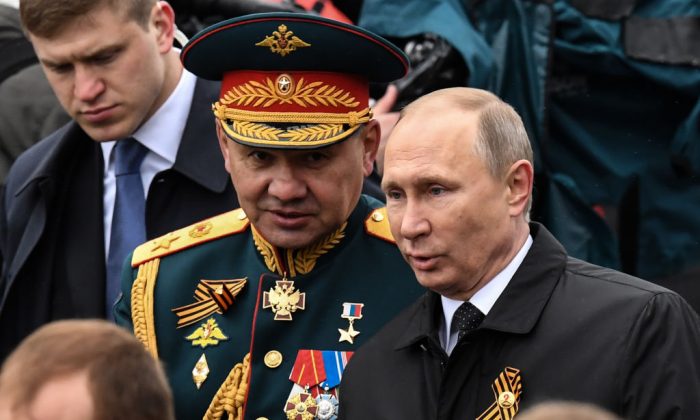 A plane carrying Russian Defense Minister Sergei Shoigu was buzzed by a NATO F-16 fighter jet as it flew over the Baltic Sea, but was seen off by a Russian Sukhoi-27 military jet on Wednesday (June 21).

The F-16 had tried to approach the aircraft carrying the Defense minister even though it was flying over neutral waters, Russian agencies said. Shoigu was reported to be en route to the Russian exclave of Kaliningrad for a meeting to discuss how well Russia’s western flank was defended.

One of the Russian fighter jets escorting Shoigu’s plane had inserted itself between the Defense minister’s plane and the NATO fighter and tilted its wings from side to side to show the weapons it was carrying, Russian agencies said.

After that, agencies said the F-16 left the area.

Russia is refining its defenses on its western flank in response to what it regards as NATO’s aggressive actions, Russian Defense Minister Sergei Shoigu said as he arrived in Kaliningrad, according to Russian news agencies.

The Baltic Sea has become an area of rising tensions between Moscow and NATO. Earlier this month, Russia scrambled a fighter jet to intercept a nuclear-capable U.S. B-52 strategic bomber it said was flying over the Baltic near its border, in an incident that had echoes of the Cold War.

The Kremlin referred questions about the latest incident to the Defense ministry, which did not immediately comment. It has said in the past that all Russian flights over the Baltic are conducted in strict accordance with international law.

The incident occurred a day after the Russian Defense ministry said an RC-135 U.S. reconnaissance plane had swerved dangerously in the proximity of a Russian fighter jet over the Baltic. The ministry said at the same time that another RC-135 had been intercepted by a Russian jet in the same area.

The Pentagon had a different version of events.

Apparently referring to the same episode, Pentagon spokesman Navy Captain Jeff Davis said the U.S. aircraft “did nothing to provoke this behaviour.”

The Pentagon said the intercept had been unsafe and accused the Russian pilot of flying too fast and having “poor control” over his SU-27 fighter jet.