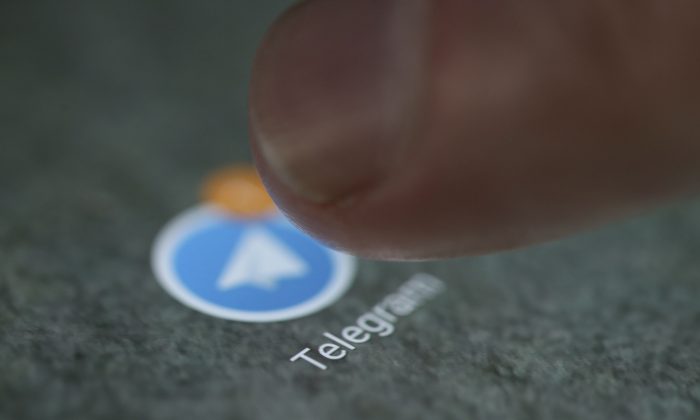 The Telegram app logo is seen on a smartphone in this picture illustration taken Sept. 15, 2017. (Reuters/Dado Ruvic/Illustration/File Photo)
International

The decision came a week after Russia’s state communication watchdog filed a lawsuit to limit access to Telegram messaging app following the company’s refusal to give Russian state security services access to its users” messages.

With more than 200 million users worldwide, the mobile messaging app allows people to communicate via encrypted messages which cannot be read by third parties, including government authorities.

Pavel Durov, founder of the Telegram, had repeatedly said his company would not hand over encryption keys to Russian authorities as it does not share confidential user data with anyone.

In Russia, Telegram is increasingly popular as an app for mobile devices and desktops—not only among ordinary people but is widely used by authorities.

The Kremlin uses Telegram to coordinate timings of regular conference calls with Vladimir Putin’s spokesman, while many government officials use the messenger to communicate with media.

When Reuters asked a person in the Russian government on how they would operate without access to Telegram, the person, who asked not be identified due to the sensitivity of the issue, replied by sending a screenshot of his mobile phone with an open VPN app.

Users in Russia actively use virtual private networks, or VPNs, and other technologies, known as anonymisers, that allow people to get around restrictions that Russian authorities periodically impose on internet resources.

Telegram became the second global network after LinkedIn to be blocked in Russia. LinkedIn was blocked in 2016 when a court found the firm guilty of violating a law that requires companies holding Russian citizens’ data to store it on servers on Russian soil.

The ban on using Telegram in Russia comes at a time when the company is undertaking the world’s biggest initial coin offering—a private sale of tokens which could be traded as an alternative currency, similar to bitcoin or Ethereum. The company has so far raised $1.7 billion in pre-sales via the offering, according to media reports.

By Andrey Ostroukh and Maria Kiselyova