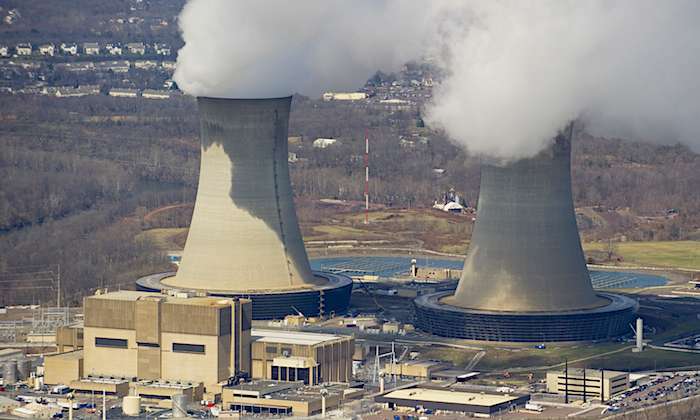 An aerial view of the Limerick Generating Station, a nuclear power plant in Pottstown, Pa., March 25, 2011. Two congressional committees are looking into a controversial deal that gave a Russian company 20percent control of the U.S. uranium supply. (Stan Honda/AFP/Getty Images)
US News

A controversial deal that connected Russian kickbacks to the Clinton foundation with a business takeover that gave the Russian government control of 20 percent of America’s uranium supply could face two congressional investigations.

The scandal centers on evidence the FBI uncovered of a Russian bribery plot before the Obama administration approved a 2010 nuclear deal with Moscow.

The deal has been subjected to what one media-analysis group called a media blackout. Though FBI investigators uncovered solid evidence the Russian government used bribes to secure a deal that could undermine U.S. national security, it has received little mainstream media coverage.

Now the House Committee on Oversight and Government Reform has started looking into the deal,  Rep. Ron DeSantis (R-Fla.), a member of the committee told Fox News on Sunday.

DeSantis said he has firsthand knowledge of leaked information about the deal.

“Clearly, it’s in the public’s interest that this individual be able to tell his story to Congress, ” he said.

The deal concluded while Hillary Clinton was secretary of state but Clinton has denied any involvement in the deal. However, those central to the deal were significant supporters of the Clinton Foundation and Clinton’s husband, former President Bill Clinton.

Calls to the oversight committee seeking comment on the status of any probe of the deal were not returned by publication time.

While DeSantis and his representative also could not respond to requests for comment by publication time, DeSantis has said the facts of the deal need to be investigated.

DeSantis told Fox the statutes of limitations might pre-empt any potential criminal prosecution that could arise from investigations of the 2010 deal.

The Obama-era deal gave a Russian company control over one-fifth of the U.S. uranium supply.

The Russian atomic energy agency, Rosatom, took over a Canadian company with uranium-mining stakes stretching from Central Asia to the American West, renaming it Uranium One.

Many of the people involved in the sale were friends of President Bill Clinton and Secretary of State Hilary Clinton, and made significant contributions to their charity, the Clinton Foundation. President Clinton also received a $500,000 speaking fee from a bank selling Uranium One stock.

The deal required State Department approval. Eight other U.S. government agencies also had to approve the deal before it went through. The most important of these was the Committee on Foreign Investment in the United States (CFIUS.)

Several State Department officials and spokespersons for Hillary Clinton’s 2016 presidential campaign claim Clinton, then Secretary of State, was not involved in the approval process.

The FBI investigated potential bribery before the deal was approved but may not have notified agencies and CFIUS of its findings.

The Senate Judiciary Committee has started an investigation into what the FBI uncovered and whether any of the approving agencies knew the deal was being investigated by the FBI.

Calls for comment to the Judiciary Committee Chair Sen. Charles Grassley (R-Iowa), were not returned by publication time.

Grassley has reportedly asked the Justice Department to lift a nondisclosure agreement the FBI confidential informant said prevents him from speaking to Congress about the criminal probe linked to the deal.

DeSantis said on Oct. 22 that the informant had signed a nondisclosure deal with Obama administration Attorney General Eric Holder and was “threatened with reprisal” by the Justice Department under Attorney General Loretta Lynch when he tried to “come forward” in 2016.

It’s unclear whether the informant with whom DeSantis spoke is the same one to whom Grassley has referred.

“He believes that this is an important issue and he has indicated to me that he is supportive of what we are doing. So, I think you are going to see action,” DeSantis told Fox.

The Senate Judiciary Committee started its investigation after reading reports that the FBI had evidence that some Russian nuclear officials were involved in fraudulent dealings before the 2009 approval of the deal.

Bozell has criticized mainstream outlets for virtually ignoring the scandal after the Hill broke the story on Oct. 17.

“The media’s silence speaks volumes. Clearly they are only interested in stories about potential wrongdoing with the Kremlin if it can be used against President Trump,” he charged.

According to the Media Research Center, CBS has devoted only 69 seconds to the story while ABC and NBC have yet to cover it.