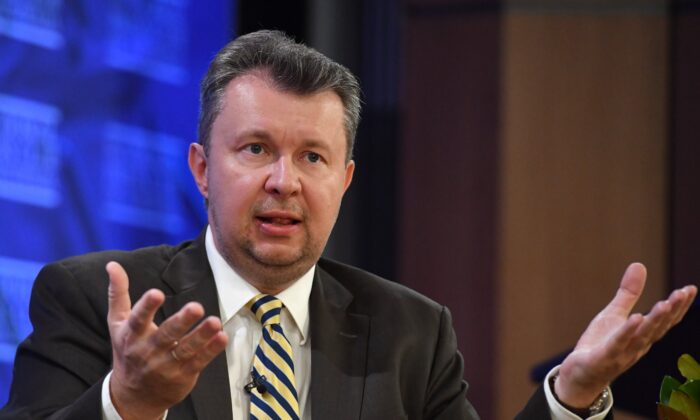 Russian Ambassador Should Be Expelled From Australia: Ukraine Diplomat

Ukraine’s top diplomat in Australia said the Russian ambassador, Aleksey Pavlovsky, should be “expelled” from the country.

“I’m a diplomat. I have to play along with my diplomatic narratives,” Ukrainian Charge d’Affaires Volodymyr Shalkivskyi told reporters at the National Press Club on March 10.

“But when you have more than 50 children killed in your country due to the shelling, yes, I’d like the Russian ambassador to be expelled.”

He also added that he was not in a position to be diplomatically polite, and the fact that his parents were in bomb shelters made him more decisive.

The Australian government has already announced a rollout of measures to combat an alleged Russian disinformation campaign.

“The Australian Government is placing new sanctions on Moscow’s propagandists and purveyors of disinformation, who are trying to legitimatise Russia’s unprovoked, unjustified invasion with false narratives such as the ‘de-Nazification’ of Ukraine,” Foreign Minister Marise Payne said on March 8.

In his speech, Shalkivskyi said Ukrainians were fighting “fiercely” to defend their country against the Russian invasion.

“Mr. Putin truly believed that people would greet [the Russians] with flowers, but the fact is that people are returning with Molotov cocktails,” he said.

“You can win a war against a foreign army, but you cannot win the war against free people who are determined to fight for their freedom,” he added.

Shalkivskyi claimed the war was the “sick idea” to restore the Soviet Union.

“In Putin’s mind, the West was divided. The West was not united, so it was easy to play the game with the West in order to divide and negotiate,” he said.

Shalkivskyi was grateful for all the support from the government and citizens, who have been inquiring about places to donate money and volunteering to host Ukrainian families.

The Australian government has pledged $70 million (US$50 million) in military aid and a further $35 million in humanitarian aid.

A fourth round of talks between Russian and Ukrainian foreign ministers are slated to meet in Turkey on Thursday, according to Turkey’s top diplomat, Mevlut Cavusoglu.

“Hope this step will lead to peace and stability,” Cavusoglu said on Twitter.