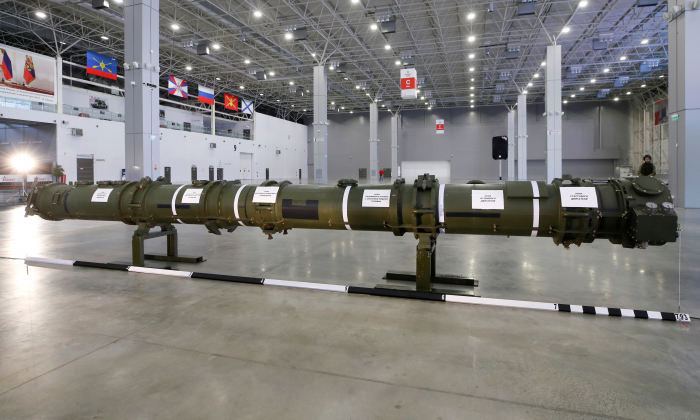 A component of SSC-8/9M729 cruise missile system is on display during a news briefing, organized by Russian defence and foreign ministries, at Patriot Expocentre near Moscow, Russia, on Jan. 23, 2019. (Reuters/Maxim Shemetov)
World

Russian Defense Ministry officials took the wraps off the never-before-seen SSC-8 cruise missile on Jan. 23, in an attempt to challenge the U.S. claim that the weapon violates a nuclear weapons pact signed during the Cold War era.

Moscow displayed the missile two days after Robert Wood, the U.S. disarmament ambassador, called on Russia to destroy all of the SSC-8 missile systems and related components. Wood voiced the demand with roughly two weeks left before an early February deadline the U.S. set for Russia to come into compliance with the treaty.

In a press conference accompanying the unveiling, Russian officials said that the missile, which Russia calls Novator 9M729, is in compliance with the treaty. The missile’s effective range falls six miles short of the range prohibited by the treaty, the officials claimed.

The commander of Russia’s Missile and Artillery Force, Lt. Gen. Mikhail Matveyevsky, told reporters that the 9M729 missile system is an upgrade from an earlier iteration, codenamed 9M728. The mobile launcher for the new missile had to be updated because the missile is slightly longer. Most of the parts in the two systems are identical, according to Matveyevsky.

“A special configuration of the self-propelled launcher was developed for the 9M729 missile. It accommodates four 9M729 missiles, while the previous launcher carries two 9M728 missiles,” Matveyevsky said.

The United States has accused Russia of violating the Intermediate-Range Nuclear Forces (INF) treaty since the mid-2000s. Under the treaty, Russia and the United States agreed to ban the production, possession, and testing of short- and mid-range ground-launched missile systems. Washington claims that the SSC-8, a NATO classification for the 9M729 system, reaches a range prohibited by the treaty.

President Donald Trump announced his intention to withdraw the United States from the INF in October last year. Washington hasn’t yet served an official notice. On Dec. 4 last year, Secretary of State Mike Pompeo gave Russia 60 days to comply with the treaty, signaling that an official notice will be served in early February. The withdrawal will be effective six months after the notice is served.

NATO foreign ministers agreed to formally declare Russia in “material breach” of the INF Treaty in December, after Pompeo briefed them on Russian violations at the alliance headquarters in Brussels.

In announcing the withdrawal, Trump signaled that he hopes for a new treaty would include China. Unbound by the INF, China has pursued aggressive development of missiles that Russia and the U.S. can’t deploy under the treaty. Both Moscow and Washington are concerned by the significant arsenal that’s been developed by Beijing. One-third to one-half of China’s ballistic missile arsenal would violate the INF if Beijing was bound by the treaty, according to a U.S. assessment.

“There’s a new strategic reality out there. This is a Cold War, bilateral ballistic missile-related treaty in a multipolar ballistic missile world,” national security adviser John Bolton said in Moscow on Oct. 23 last year. “This is something that concerns the Russians very substantially and we talked about that.”

Pompeo said last year that he gave Russia the 60-day window to appease U.S. allies who asked for extra time in order to mount a diplomatic campaign to convince the Kremlin to return to compliance. The latest U.S. statement and the Russian unveiling are signs that Moscow isn’t budging, despite the international efforts.