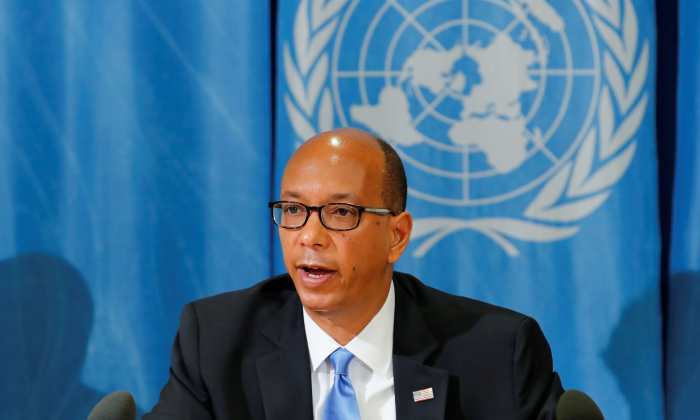 U.S. representative to the Conference on Disarmament Robert Wood at a news conference at the United Nations in Geneva, Switzerland, on April 19, 2018. (Denis Balibouse/Reuters)
Trump Administration

The United States called on Russia on Jan. 21 to destroy all missile systems that violate the Intermediate-Range Nuclear Forces (INF) treaty and accused Moscow of destabilizing global security.

Ambassador Robert Wood, permanent representative to the Conference on Disarmament and U.S. special representative for Biological and Toxin Weapons Convention (BWC) Issues, said that the SSC-8 missile system is a “potent and direct threat to Europe and Asia.”

Washington has accused Moscow of deploying the system in violation of the treaty since the mid-2000s.

“Unfortunately, the United States increasingly finds that Russia cannot be trusted to comply with its arms control obligations and that its coercive and malign actions around the globe have increased tensions,” Wood said at the United Nations-sponsored Conference on Disarmament. “Russia must verifiably destroy all SSC-8 missiles, launchers, and associated equipment in order to come back into compliance with the INF Treaty.”

The Russian delegation at the conference didn’t immediately issue a response. President Vladimir Putin previously said that Russia would build more of the banned missile systems if the United States withdraws from the treaty.

The demand by Wood is a sign that efforts by U.S. allies in Europe to persuade Russia to return to compliance haven’t borne fruit. On Dec. 4, 2018, Secretary of State Mike Pompeo gave Russia 60 days to destroy the missile systems, setting the stage to serve Moscow with an official withdrawal notice in early February. Pompeo said at the time that European allies lobbied for the 60-day window in order to mount a diplomatic campaign to attempt to resolve the impasse with the Kremlin.

President Donald Trump announced his intention to withdraw from the INF treaty in October last year.

Under the treaty, signed in 1987, the two nations agreed to ban the production, possession, and testing of short- and mid-range ground-launched missile systems and related equipment. The United States and Russia are the only two nations bound by the treaty. Both have concerns about China, which has developed a formidable arsenal of mid-range missile systems that neither Moscow nor Washington can deploy under the INF treaty.

Washington has repeatedly accused Moscow of violating the treaty. Russian officials ignored the accusations for years until 2017 when the United States revealed the internal Russian codename for the missile system: SSC-8/9M729. Moscow has changed its tune since then, saying that the system is compliant with the treaty and that Washington hasn’t provided enough proof.

Washington’s withdrawal notice, if delivered in February, will be effective in six months from the date of service.

The nerve agent used in an attempt to assassinate former Russian spy Sergei Skripal and his daughter Yulia in Salisbury, Britain, last March showed Russia’s “reckless behavior” and failure to meet its obligations under a treaty banning the use of chemical weapons, he said.