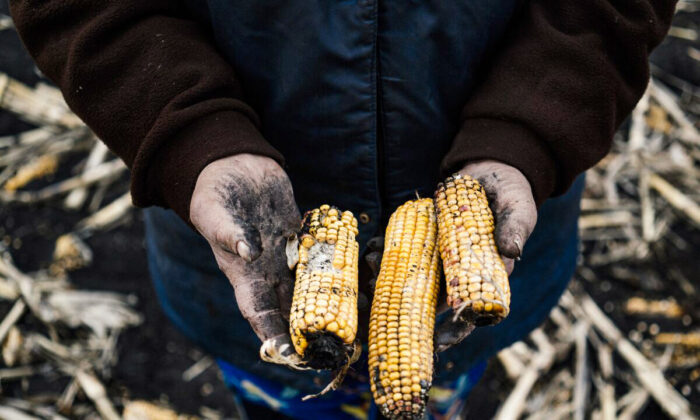 Lida Antonova, 79, holding corn in a field near the village of Petropavlivka, Ukraine, on April 6, 2015. (DIMITAR DILKOFF/AFP via Getty Images)
China Business & Economy

Ukraine was forced to suspend commercial shipping at its ports on Feb. 24 as Russian missiles rained down across the country. As a major exporter of corn and wheat, Ukraine’s situation has stoked unease in the global grain market and will likely see countries like China need to spend more to secure supplies of grain if ships continue being unable to depart over the next few weeks or months.

Hours earlier, Russian officials said that Moscow had also shut down their commercial vessel operations in the Azov Sea, but that Russia’s main shipping operations at ports in the Black Sea were being maintained.

Earlier on Thursday morning, Russian forces launched a massive attack on Ukraine from the north, east, and south, which has been described as the biggest assault by one state against another in Europe since World War II.

On the other side of Eurasia, China is a big importer of Ukrainian grain.

According to China’s General Administration of Customs (GAC), China traded 124.8 billion yuan ($19.72 billion) in goods with Ukraine in 2021. Of that, 64 billion yuan ($10.11 billion) were imports from Ukraine, most of which was grain. Compared with 2020, trade increased 21 percent and imports by China increased 15.5 percent.

China imported 8.24 million metric tons of corn from Ukraine in 2021, which accounted for 29.07 percent of China’s total corn imports, according to GAC. Chinese state-run CCTV reported on Feb. 24 that Ukrainian corn imports are mainly shipped from Kyiv to different ports across China. Kyiv was attacked by Russian forces on Feb. 24 and remains under attack.

China relies on imported corn to feed its pigs, poultry, and other livestocks. According to China’s State Council, China produced 52.96 million metric tons of pork in 2021—over 671 million pigs. By the end of the year, there were 43.29 million breeding sows in the country.

China’s state-run China Business Network (CBN) quoted Gu Jian, a researcher at the state-run Bric Agriculture Consulting Institute, on Feb. 24 saying that the Chinese market was worried about corn supplements due to the Russia-Ukraine war.

“Since the tensions between Russia and Ukraine, China’s corn price has kept on increasing,” Gu said. “Ukraine used to be China’s main corn exporter. About 70 to 80 percent of imported corn was from Ukraine. In recent years, China has imported more from the United States.”

But Ukraine remains a main and key exporter to China’s corn business, he said.

Furthermore, China’s soybeans and wheat prices have increased following the outbreak of the Russia-Ukraine war, although China imports few of these grains from Russia or Ukraine.

In the report, CBN quoted Cao Hui, chief wheat market analyst at China’s Ministry of Agriculture and Rural Affairs, who said that global wheat prices had increased because both Russia and Ukraine are big wheat exporters. The increased global market prices for wheat means that China can no longer purchase cheap wheat from any country, he said.

On Feb. 23, the GAC announced that the regime is allowing the import of Russian wheat, but the wheat must be from regions where the fungus Tilletia Controversa hasn’t been reported.