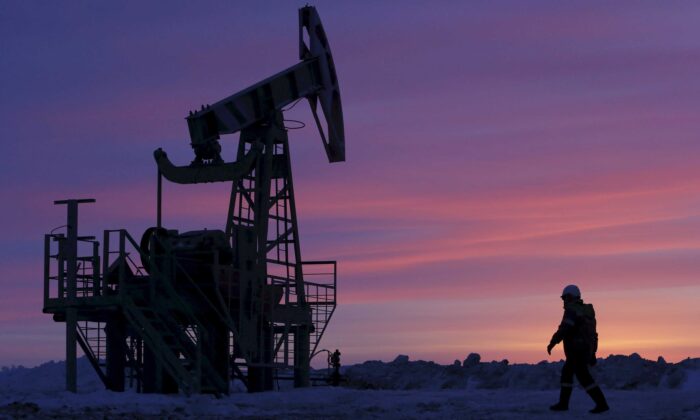 A worker is seen at an oil field owned by Bashneft, Bashkortostan, Russia, on Jan. 28, 2015. (Sergei Karpukhin/Reuters)
Economy

The U.S. administration insists that a Russian invasion of Ukraine is imminent. White House national security adviser Jake Sullivan stated that military action in the region might happen “any day now,” repeating this warning on several morning news shows.

Moscow reportedly has as many as 136,000 troops stationed along its border with Ukraine.

Western leaders have promised to apply severe economic sanctions on Kremlin officials. But President Vladimir Putin and his Cabinet have been working to skirt these restrictions by enhancing the country’s relationship with the likes of China, recently striking a 25-year deal to supply the world’s second-largest economy with more oil and gas.

Moscow could still be shut out of international payment and banking systems, potentially decimating the national economy and destroying the ruble. But market analysts believe there could be far-ranging impacts for the global economy in this worst-case scenario, especially when it comes to energy prices.

A Spike in Energy Prices

Oil and natural gas prices have had a strong start to 2022, rising as much as 18 percent year-to-date. Energy commodities have been booming because investors are monitoring tight market conditions and the situation unfolding in Eastern Europe.

Should the conflict instigate a supply shock, Brent crude, the international benchmark for oil prices, could skyrocket to $150 sometime in the first quarter of the year, JPMorgan Chase analysts forecast.

“The latest geopolitical tensions between Russia and Ukraine raise the risk of a material spike this quarter,” JPMorgan economists Joseph Lupton and Bruce Kasman wrote in a research note last month. “That this comes on the back of already elevated inflation—running at a multi-decade high last quarter—and a global economy that is being buffeted by yet another wave of the COVID-19 pandemic adds to the near-term fragility of what is otherwise a fundamentally strong recovery.”

The financial institution also thinks this could eat into the global gross domestic product by 1.6 percent, and force central banks to “display less patience than normal” in response to oil price shocks.

Brent prices are trading around $91 per barrel.

Natural gas could also see enormous gains, although traders are more focused on weather conditions as of late. Prices have struggled in recent sessions, falling about 25 percent over the past week.

This could change, industry observers note.

Western Europe depends on Russia for as much as 40 percent of its gas, and stockpiles are below the European Union’s five-year average. It’s estimated that as much as 155 billion cubic meters (bcm) (5.4 trillion cubic feet) of natural gas imports to Europe, including 40 bcm piped through Ukraine, could be in jeopardy.

Any retaliation could threaten the region’s energy supply, affecting millions of households and businesses.

“In the short term, it would be difficult for Europe to compensate,” Carl Tannenbaum, executive vice president and chief economist for Northern Trust, said in a note. “Natural gas is not easy to store or transport, so inventories are low and alternative channels can take a long time to develop. With inflation already running high, an energy price shock would be especially unwelcome.”

Rystad Energy stated in a new report that “more LNG supply is available,” but European countries would be required to “pay elevated prices.”

While Australia and Asia have an abundance of available spot volume, the shipment distance might be a challenging hurdle to overcome. This makes the United States, Africa, and parts of Europe potential alternatives.

“The bulk of the extra LNG supply could come from the U.S., which has 102 bcm of free on board (FOB) volumes on the market,” Knutsson said.

IHS Markit agrees. The information and analytics firm published a new report, titled “Putting Europe’s Security of Gas Supply to the Test,” writing that “LNG imports to Europe would be sufficient to overcome shutoff of Russia gas flows through Ukraine.”

“Under an extreme, if highly unlikely, scenario where all Russian pipe flows were cut off, the tightness of global LNG supply and limited spare European LNG regasification capacity means that other supply levers would be needed to close the gap,” Shankari Srinivasan, vice president of global gas at IHS Markit, wrote in a note. “Extra coal and nuclear power generation capacity—either in the form of mothballed capacity being brought back online, resorting to strategic reserves or delayed plant closures—along with additional drawdowns of gas from storage would all be required.”

Over the past month, the White House has been in communication with natural gas firms and other key producing countries to mitigate a power crunch. U.S. officials have engaged with other parties about increasing output capacity and transporting more supply to Europe.

“Hopefully, the potential costs in dollars, euros, hryvnia, and rubles will be significant enough to head off conflict in the first place,” Srinivasan said.

Energy commodities have been the primary focus in any discussion surrounding the Ukraine–Russia conflict. But other commodity products could come under tremendous pressure.

This could initiate significant effects that would seep into the global marketplace.

“That immediately removes half of all global nickel exports for kitchenware, mobile phones, medical equipment, transport, buildings, and power; palladium for catalytic converters, electrodes, and electronics; and a quarter of aluminum for vehicles, construction, machinery, and packaging and would result in huge upside pressure on prices,” Rabobank’s global strategist Michael Every wrote in a note.

Indeed this would exacerbate the global supply chain crisis. At the same time, according to Every, this would trigger long-term policy implications and “accelerate some of the global trends already underway,” such as onshoring and decoupling.