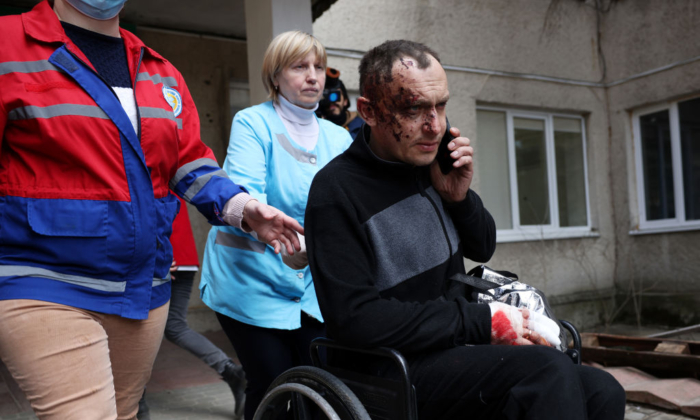 A man wounded in this morning's air strikes at a nearby military complex is assisted by medical staff outside Novoiavorivsk District Hospital on March 13, 2022 in Novoiavorivsk, Ukraine. (Dan Kitwood/Getty Images)
US News

Russia, Ukraine at Odds Over Casualties in Strike on Yavoriv Training Base

TRUSKAVETS, Ukraine—Russian and Ukrainian officials have offered contrasting accounts of the casualties from the missile attack on a military training facility in Yavoriv, Ukraine, on March 13.

Hours after the aerial strike, the governor for the region said 35 people were killed and 134 were wounded. A spokesperson for the Lviv Regional Administration told The Epoch Times on March 14 that according to the Ukrainian Ministry of Defense, no foreigners were killed in the attack.

However, the Russian Defense Ministry offered a starkly different account roughly 13 hours after the attack, claiming that a “high-precision long-range weapon” had killed “up to 180 foreign mercenaries.”

“A number of Western countries at the state level encourage the participation of their citizens as mercenaries of Ukraine in hostilities against units of the Russian troops. All responsibility for the death of this category of foreign citizens in Ukraine lies on just the leadership of these countries,” the Russian Defense Ministry said in a statement. “We know all the locations of foreign mercenaries in Ukraine. They will continue to be targeted.”

A foreign volunteer soldier who served at the base at the time of the attack told The Epoch Times that the facility housed recruits from the United States, England, Germany, Poland, France, and other countries.

The U.S. Embassy in Warsaw, Poland, told The Epoch Times that it didn’t know if any U.S. citizens were killed in the attack. The German, Polish, and British embassies didn’t respond to requests for comment.

Jesper Soder, a Swedish citizen who was at the Yavoriv facility at the time of the attack, survived.

“After last night’s bombing, our base was totally destroyed. Several dead and total chaos reigned. My mission was to defend and protect Western soldiers on the ground to actually go to Kyiv today. Mission canceled, as you can imagine,” Soder wrote on Facebook on March 13.

Alekcandra Sassa Haydari, a Swedish national, hasn’t yet heard from her son. She believes that he was at the Yaroriv base at the time of the bombing. In a Facebook comment, Soder said he saw her son at the base.

Volunteers at the Medyka border crossing between Ukraine and Poland told The Epoch Times that they met a man from the UK who said he had survived, but that two of his friends were killed in the attack.

Russian missiles struck the facility, formally known as The International Peacekeeping and Security Center (IPSC) at roughly 6 a.m. on March 13, flattening the barracks, which housed about 300 men, according to accounts from first-hand witnesses. Maksym Kozytskyy, governor of the Lviv Regional State Administration, said a total of 30 missiles targeted the base, some of which were intercepted.

U.S. Secretary of State Antony Blinken condemned the attack in a March 13 statement.

“We condemn the Russian Federation’s missile attack on the International Center for Peacekeeping and Security in Yavoriv, close to Ukraine’s border with Poland. The brutality must stop,” Blinken wrote on Twitter.

Prior to Russia’s invasion of Ukraine on Feb. 24, the IPSC served as a training facility for Ukrainian soldiers. The center has hosted NATO drills and Western officials, including NATO Military Committee chair, Adm. Rob Bauer.

While exact figures are difficult to confirm, thousand of foreign citizens are believed to be in Ukraine as volunteers in the war.