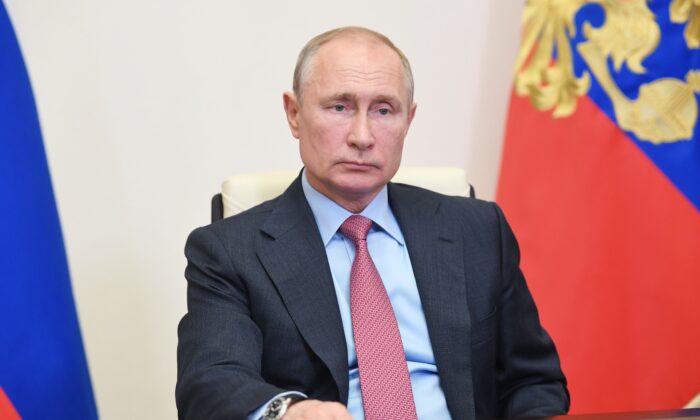 Russian President Vladimir Putin attends a meeting with Moscow Mayor to discuss the epidemiological situation in the Russian capital, via a teleconference call at Novo-Ogaryovo state residence, outside Moscow, Russia, on May 27, 2020. (Aleksey Nikolskyi / various sources / SPUTNIK/AFP via Getty Images)
Europe

MOSCOW—Russia will hold a nationwide vote on constitutional reforms on July 1, President Vladimir Putin said on June 1, setting the stage for a delayed ballot that could extend his rule until 2036.

Putin postponed the original vote, which had been set for April 22, because of the CCP (Chinese Communist Party) virus outbreak, saying the health and safety of citizens was his top priority as the pandemic worsened.

But he says the situation has now broadly stabilized and the number of infections in Moscow has dropped sharply, allowing the capital to start easing some restrictions.

The changes that Russians will vote on, already approved by Parliament and Russia’s Constitutional Court, would reset Putin’s presidential term tally to zero, allowing him to serve two more back-to-back six-year terms until 2036 if re-elected.

“I really hope the country’s citizens will take part actively in the vote on the amendments to the constitution,” Putin, whose current term ends in 2024, told a televised government meeting.

Critics have dismissed the vote as a constitutional coup, which they fear will be rigged, and urged voters to stay away or to reject the proposed changes.

One critic, Lyubov Sobol, said July 1 was too early, given the CCP virus situation.

“Let everyone get infected, just so long as the granddad in the Kremlin is satisfied?” she wrote on Twitter.

The Kremlin has said authorities will take all necessary measures to ensure voters’ safety.

Russia’s economy has been hit hard in the past two months, both by lower oil prices and a lockdown that has stoked resentment among some business owners.

Putin’s approval rating, though still high, has slipped to its lowest level in more than two decades though support for his plan to change the constitution rose to 47 percent in April, an opinion poll showed in May.