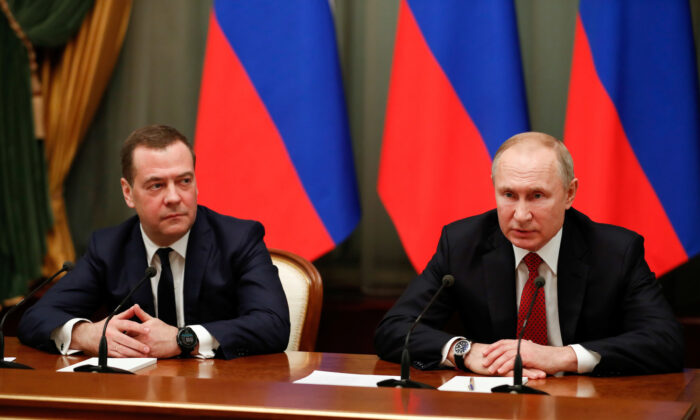 A senior Russian government official has threatened to limit exports of agriculture products to “friendly” countries only amid sanctions from Western nations in response to its invasion of Ukraine.

Dmitry Medvedev, who previously served as Russia’s president from 2008 to 2012 and is now deputy secretary of the country’s security council, took to Telegram on April 1 where he warned of the potential move.

Medvedev said that many countries depend on supplies of food from Russia, a major global wheat exporter, writing: “It turns out that our food is our quiet weapon. Quiet but ominous,” according to Breitbart.

“The priority in food supplies is our domestic market. And price control,” he continued. “We will supply food and crops only to our friends (fortunately, we have a lot of them, and they are not at all in Europe and not in North America). We will sell both for rubles and for their national currency in agreed proportions.”

He then explained that Russia would not supply products and agricultural products to those countries it deems as “enemies.”

“And we won’t buy anything from them (although we haven’t bought anything since 2014, but the list of products prohibited for import can be further expanded),” he continued. Russia previously imposed a ban on imports of certain agricultural products from the EU and other Western countries in 2014 after its annexation of Crimea.

Russia serves as a major global exporter of several commodities, including sunflower oil, barley, and wheat; the latter of which it mainly supplies to Africa and the Middle East.

It is the world’s largest exporter of wheat, according to the Observatory of Economic Complexity, having exported $10.1B in wheat in 2020 alone, despite the global COVID-19 pandemic and various supply chain issues.

The European Union and Ukraine are its main competitors in the wheat trade, which manifests as items such as pasta, bread, cereal, and fried foods for consumers.

A ban on exports of certain agriculture products to so-called “unfriendly” countries could put further pressure on those nations that are already bracing for potential food shortages resulting from the Kremlin’s invasion of Ukraine and subsequent western sanctions.

Speaking of possible shortages, U.S. President Joe Biden said during a press conference at the White House on March 24 that “it’s going to be real,” noting that “the price of these sanctions is not just imposed upon Russia, it’s imposed upon an awful lot of countries as well, including European countries and our country as well.”

Biden said the United States and Canada may need to boost their food production to avoid shortages in Europe and other places.

However, it is unlikely that the United States would likely experience any significant shortages, whereas European countries that are more dependent on Russia for imports, as well as less economically developed nations, could see fewer products on supermarket shelves.

Medvedev’s remark comes after Russian President Vladimir Putin set a deadline for customers from “unfriendly” countries, which includes all member states of the European Union, to start paying for Russian gas deliveries in roubles or face being cut off.

Multiple European buyers of Russian energy have so far refused to comply with the demand. However, Slovakia’s minister of the economy on Sunday said his country is willing to do so.