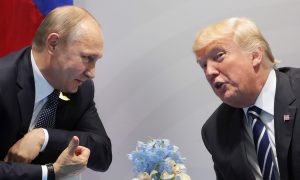 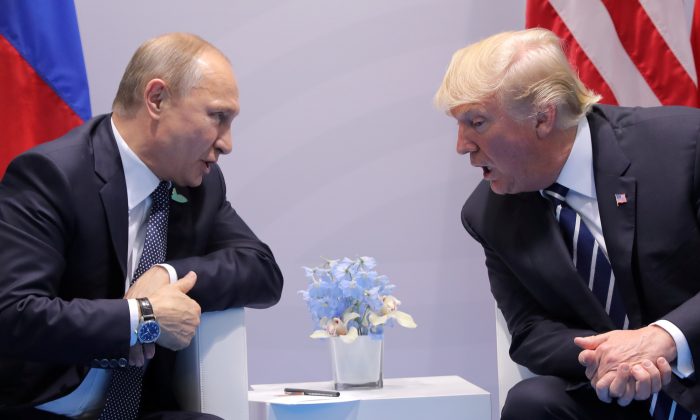 President Donald Trump speaks with Russian President Vladimir Putin during the their bilateral meeting at the G20 summit in Hamburg, Germany on July 7, 2017. (REUTERS/Carlos Barria)
International

Russia’s Foreign Ministry has ratcheted up its threats of retaliation, saying on Friday, July 14, that it would have to expel U.S. diplomats and shut down some U.S. compounds in Russia if the United States did not return two Russian-owned estates that were shut down late last year.

Former President Barack Obama seized the estates when he expelled 35 Russian officials last year over reports of Russian interference in the election.

The compounds have been a major point of contention in the ongoing diplomatic row between Russia and the United States. President Donald Trump and Russian President Vladimir Putin reportedly discussed the issue last week during a meeting at the G-20 in Germany but did not reach an agreement.

Undersecretary Tom Shannon, who will be meeting with Russian Deputy Foreign Minister Sergey Ryabkov on Monday, will face calls for their return.

The two dachas, as they are called in Russia, are in Maryland and New York. A “dacha” is a country house or cottage in Russia, typically used as a second or vacation home.

A senior congressional aide with knowledge of the issue told The Washington Post that the Maryland estate is close enough to sensitive facilities, like the Naval Air Station Patuxent River, to pose an espionage threat. It also offers a good line of sight to the National Security Agency at Fort Meade across Chesapeake Bay.

Seizing those properties and stopping Russian activity there had been something intelligence agencies had been requesting for a long time, a former senior U.S. intelligence official told the Post.

If the properties are returned, it is likely they will be under an agreement that they lose the diplomatic immunity they previously enjoyed that barred U.S. law enforcement agencies from entering.

This week Shannon received a similar letter asking that no such deal be made with Ryabkov.

“We strongly urge the State Department not to return the diplomatic compounds in Maryland and New York to the Government of the Russian Federation at this time,” they wrote. “Simply put, the Russian government has done nothing to deserve renewed access to these compounds.”

If the properties are not returned, Foreign Ministry spokeswoman Maria Zakharova told reporters that Moscow “will have to take reciprocal measures.”

Zakharova said Russia is hoping that Shannon will provide suggestions on how to resolve the  property dispute.

The talks between Shannon and Ryabkov were originally scheduled for last month but were canceled by Russia after the Trump administration issued new Ukraine-related sanctions.