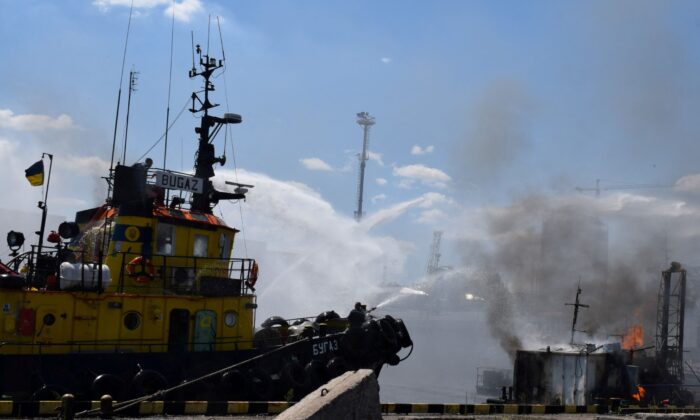 Firefighters work at a site of a Russian missile strike in a sea port of Odesa, Ukraine, on July 23, 2022. (Press service of the Joint Forces of the South Defense/Handout via Reuters)
Russia-Ukraine War

MOSCOW—Russia said on Sunday that its cruise missiles had struck military infrastructure of Ukraine’s Odesa port, destroying a military boat a day after Moscow reached a grain deal with the United Nations, Turkey, and Ukraine.

The “favorite address” is an ironic reference to the exhortations of Ukrainian forces on Snake Island in the Black Sea who reportedly told a Russian ship to “go [explicit]” itself before a Russian strike in February.

Ukrainian president Volodymyr Zelenskyy denounced the strikes on Odesa as blatant “barbarism” that showed Moscow could not be trusted to implement Friday’s deal, mediated by Turkey and the United Nations.

The Ukrainian military had said Russian missiles hit the southern port on Saturday.