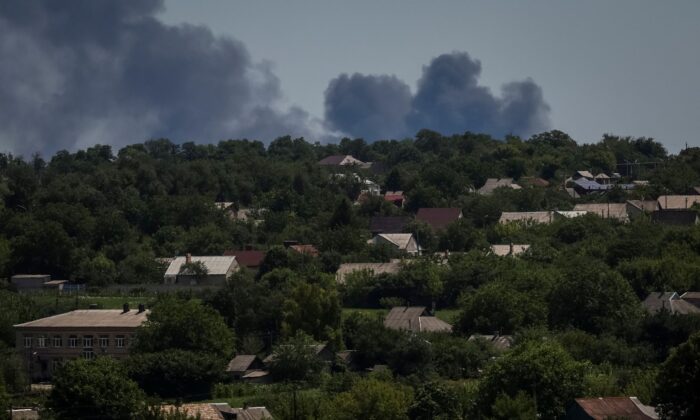 Smoke rises in the sky after strikes at the frontline in the Donbass region on July 13, 2022. (Gleb Garanich/Reuters)
Russia-Ukraine War

KYIV—Russian missiles struck the Ukrainian city of Vinnytsia far behind the frontlines on Thursday in an attack which Ukrainian officials said had left at least 12 people dead.

The strike, which Ukraine said had also wounded dozens, came a day after a breakthrough in talks between Moscow and Kyiv to unblock Ukrainian grain exports and underscored how far the two countries remain from any kind of peace settlement despite progress in those negotiations.

“There are wounded and dead, among them a small child,” Ukrainian President Volodymyr Zelenskyy wrote on the Telegram messaging app. “What is this, if not an open act of terrorism?”

The Russian defense ministry, which denies targeting civilians, did not immediately comment on the strike. Russia, which launched what it called its “special military operation” against Ukraine on Feb. 24, says its aim is to degrade Ukraine’s military infrastructure to protect its own security.

Vinnytsia lies about 200 km (125 miles) southwest of the Ukrainian capital Kyiv and is far from the main frontlines in eastern and southern Ukraine.

It posted photographs showing grey smoke rising from the twisted remains of burnt-out cars and smouldering rubble nearby.

Fighting on the Eastern Front

On the frontlines of the war hundreds of miles to the east, Ukraine said it had repelled attempted Russian ground assaults after Moscow focused its fire on and around two towns there which it views as spring-boards to taking control of bigger cities.

Ukraine, with the help of recently acquired U.S. HIMARS mobile rocket systems, has begun to strike targets deep inside Russian-controlled territory and says it is destroying ammo dumps and degrading Russia’s ability to wage war.

Daniil Bezsonov, a Russian-backed official in the self-proclaimed Donetsk People’s Republic, said on Thursday that the statelet’s armed forces and Russia were focusing their fire in eastern Ukraine on the towns of Siversk and Soledar.

“Siversk is under our operational control which means we can strike the enemy wherever they are,” he told the Solovyov Live online TV channel.

He made clear however that both towns were still held by Ukrainian forces however. The Russian plan, he said, was to seize the two towns and then move forward to attack the cities of Sloviansk and Kramatorsk from the east.

The Ukrainian military, which reported Russian shelling and air strikes on Siversk and Kramatorsk, claimed it was holding the line on all fronts and that it was repelling all attempted assaults.

The town of Soledar, seen as a gateway to the Ukrainian city of Bakhmut and Kramatorsk, had been bombed too, the Ukrainian military said.

Britain’s ministry of defense said it looked like Russian forces were struggling to make headway in eastern Ukraine as the war grinds towards the five-month mark because they were unable to marshal the necessary critical mass they needed to advance.

By Max Hunder and Pavel Polityuk