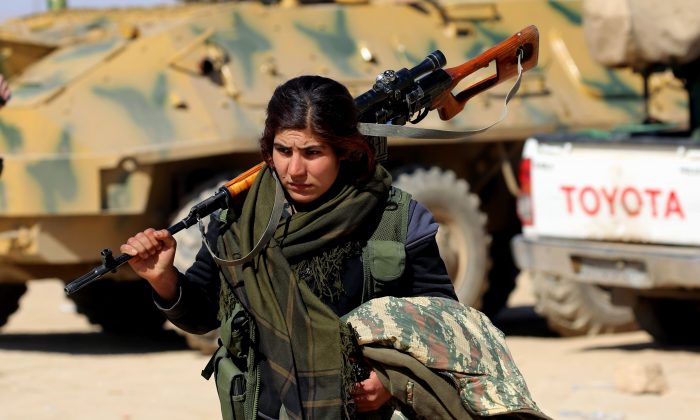 A Kurdish fighter of the US-backed Syrian Democratic Forces (SDF), made up of an alliance of Arab and Kurdish fighters, walks through the village of Sabah al-Khayr on the northern outskirts of Deir Ezzor as they advance to encircle the ISIS terrorist group's bastion of Raqa on Feb. 21, 2017. (DELIL SOULEIMAN/AFP/Getty Images)
Middle East

BEIRUT—Russia is setting up a military base in northwestern Syria in an agreement with the Syrian Kurdish YPG militia that controls the area and will be training YPG fighters as part of the fight against terrorism, the militia’s spokesman said on Monday.

YPG spokesman Redur Xelil told Reuters the agreement with Russia was concluded on Sunday, and that Russian troops had already arrived at the position in the northwestern province of Afrin with troop carriers and armored vehicles.

“The Russian presence … comes in agreement between (the YPG) and the Russian forces operating in Syria in the framework of cooperation against terrorism and to help train our forces on modern warfare and to build a direct point of contact with Russian forces,” Xelil said in a written statement.