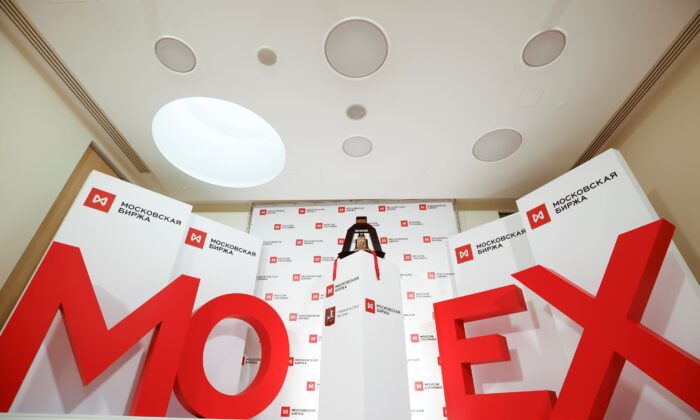 Russia’s stocks jumped on Thursday, the first day of trading in almost a month in the wake of its troops entering Ukraine, with gains in commodity stocks offset by a drop in a flagship bank and airline, in volatile trading backed by the promise of support from sovereign wealth fund money.

The government said on March 1 it would channel up to 1 trillion roubles ($10.5 billion) from its rainy-day National Wealth Fund (NWF) to buying Russian stocks roiled by a massive sell-off last month.

It was not clear if that money was being used yet, however, and the finance ministry did not immediately respond to a request for comment.

The markets are gradually reopening after President Vladimir Putin sent his forces into neighboring Ukraine four weeks ago, leading to sweeping sanctions being imposed by Western capitals and countermeasures taken by Moscow.

Those measures have seen Russia’s financial markets severed from the global financial network and sent its currency tumbling. Russia calls its actions in Ukraine “a special military operation” to degrade its southern neighbor’s military capabilities and root out people it called dangerous nationalists.

Restrictions on trade with foreigners and a ban on short selling of Russian stocks remained in place as the Moscow Exchange partly resumed equity trade on Thursday.

The benchmark MOEX stock index rocketed more than 11 percent in early trade before giving away some of its early gains to trade up 4.4 percent at on the day to 2,580 points by 1045 GMT. Trading of its dollar-denominated peer RTS remained suspended.

“Large bids to buy Russian shares have been seen since the market opening,” BCS Brokerage said in a note. “The overall sentiment is supported by the confidence that the finance ministry will buy stocks.”

The stock market relaunch reflected the double-edged sword of sanctions.

Energy firms enjoyed some stellar gains with companies such as gas producer Novatek, oil majors Rosneft and Lukoil as well as gas giant Gazprom up 10–20 percent.

Brent crude oil, a global benchmark for Russia’s main export, hovered near $121 per barrel, up some 13 percent since the start of the week as worries over supply disruptions from the Russia Ukraine crisis have boosted oil prices.

However, shares in Russia’s second-largest lender VTB, which is subject to Western sanctions, were down around 5 percent. And with most European airspace closed to Russian planes, flagship carrier Aeroflot sank about 20 percent at one point before cutting its losses to 16 percent.

Meanwhile Russia’s rouble extended its recovery, gaining 2 percent to hover close to 96 against the dollar in Moscow trade.

The currency had hit its strongest level in three weeks at 94.975 on Wednesday after Putin said Russia would start selling its gas to “unfriendly” countries in roubles.

Against the euro, the rouble was 2.5 percent higher at 105.29, pulling further away from an all-time low of 132.4 it hit in Moscow trading earlier in March, but far from levels of around 90 seen before Russia sent troops into Ukraine on Feb. 24.

Russia resumed trading of OFZ treasury bonds on Monday with the central bank helping to stabilize papers with interventions, the amount of which it has not yet disclosed.

Yields of benchmark 10-year OFZ bonds, which move inversely to their prices, stood at 13.65 percent after hitting an all-time high of 19.74 percent on Monday.