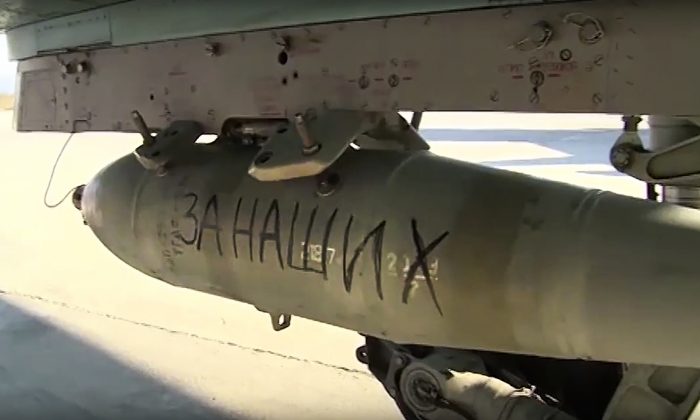 The pilots also wrote “For ours” and “For our people” on some missiles before sending them to Syria, with targets including the Raqqa province where the terror group Islamic State has been frequenting recently.

“‘Pilots and technicians of Hmeymim airbase have sent their message to terrorists by priority airmail,” the caption accompanying the video said.

The messages are in support of France after ISIS terrorists killed 130 people and wounded hundreds of others earlier this month.

The video and pictures come after photos emerged of U.S. Hellfire bombs being prepared for the same use, with the words “From Paris, with love” scrawled on them.

Russia stepped up its campaign against ISIS after determining the terror group was responsible for downing a Russian airliner in Egypt last month, killing all 224 on board.

Russia hit over 200 targets on the same day President Vladimir Putin confirmed the Islamic State bomb brought down the plane, with oil trucks and refineries among the targets.