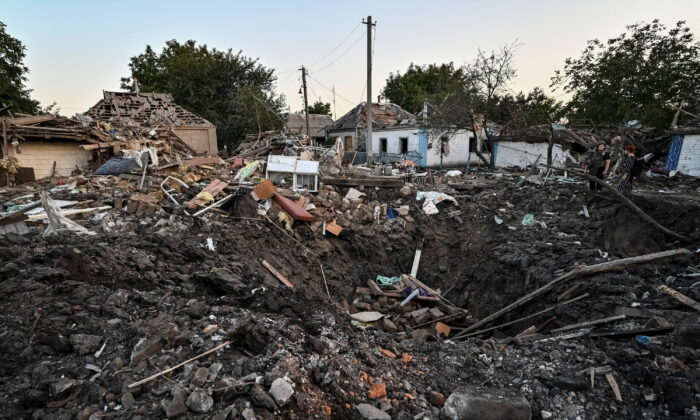 People stand next to a building destroyed by a military strike, in Chaplyne, Dnipropetrovsk region, Ukraine, on Aug. 24, 2022. (Dmytro Smolienko/Reuters)
Russia-Ukraine War

KYIV—Russia’s Defence Ministry said on Thursday its forces had struck a railway station in eastern Ukraine.

In its daily briefing, the ministry said an Iskander missile had hit a military train on Wednesday at the station of Chaplyne that had been set to deliver arms to Ukrainian forces on the frontline in the eastern Donbass region.

Ukrainian presidential aide Kyrylo Tymoshenko said 21 people were killed when the strike hit the railway station and set five train carriages ablaze, while a boy died when a missile hit his home in the vicinity. The death toll rose to 25 on Thursday after three more bodies were retrieved from rubble, he said.

The Russian ministry said some 200 Ukrainian military personnel had died in the attack.

Reuters was unable to independently verify the reports.

Russia has also said that rail infrastructure is a legitimate target since it serves to supply Ukraine with Western weapons.

After Zelenskyy told the U.N. Security Council about the attack in a video message, U.S. Secretary of State Antony Blinken said on Twitter: “Russia’s missile strike on a train station full of civilians in Ukraine fits a pattern of atrocities.”

In its daily briefing, Moscow also said it had destroyed eight Ukrainian fighter jets in strikes at air bases in Ukraine’s Poltava and Dnipropetrovsk regions. That would be one of the heaviest losses for Ukraine’s air force in recent weeks.

Ukrainian regional authorities reported Russian missile strikes in the Khmelnytskyi area, west of Kyiv and hundreds of kilometres from front lines. No damage or casualties were reported.

The Chaplyne attack and artillery strikes of frontline towns, including Kharkiv, Mykolaiv, Nikopol and Dnipro, followed President Volodymyr Zelenskyy’s warnings of Russian provocations ahead of Wednesday’s 31st anniversary of Ukraine’s declaration of independence from the former Soviet Union.

Fighting in the area near the Zaporizhzhia nuclear plant, Europe’s biggest, in eastern Ukraine has emerged as a major source of concern over the past weeks, with Moscow and Kyiv trading accusations of risking a disaster by shelling the plant.

The United Nations has called for the area to be demilitarized and its nuclear watchdog, the International Atomic Energy Agency, is seeking to gain access.

On Thursday, its chief Rafael Grossi told a French broadcaster the agency was “very, very close” to being able to travel to the plant, captured by Russian forces in March but still run by Ukrainian technicians.

Safety systems at the Zaporizhzhia plant were activated on Thursday, the RIA Novosti news agency reported, after power cuts were reported across swathes of Russian-controlled territory.

Meanwhile, President Vladimir Putin signed a decree on Thursday increasing the size of its armed forces to 2.04 million from 1.9 million.

At a U.N. Security Council session on Wednesday, Russian Ambassador Vassily Nebenzia repeated that Moscow’s aim was “to denazify and demilitarise” Ukraine to remove “obvious” security threats to Russia.

By Tom Balmforth and Natalia Zinets