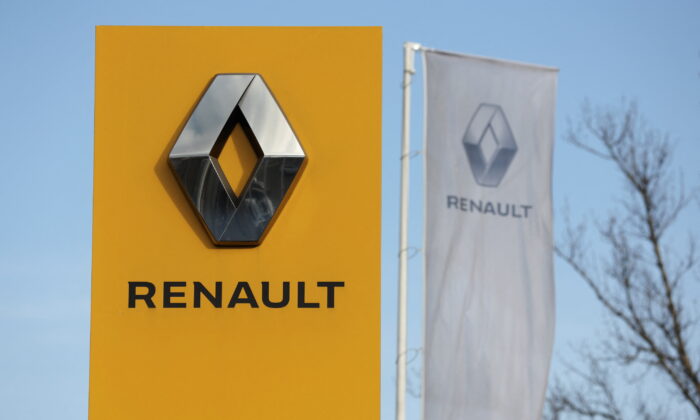 The logo of Renault is displayed near a car showroom in Saint Petersburg, Russia on March 24, 2022. (Reuters)
Economy

Russian authorities will decide how to use Renault’s plant in Moscow by the end of next week, the Ministry of Industry and Trade said on Thursday, after the carmaker announced it was suspending operations there.

Renault, the biggest player in the Russian auto market, said on Wednesday it stopped production at the plant and would assess its options on its majority stake in Avtovaz, Russia’s No. 1 carmaker following Russia’s invasion of Ukraine.

The government’s comments about the future of the factory come after the Kremlin suggested it could nationalise assets of foreign firms that left the country.

“The Ministry of Industry and Trade will discuss the prospects of developing the Renault Russia factory with the Moscow government. The joint solutions will be announced by the end of next week,” the ministry said.

“The Ministry of Industry and Trade is in constant contact with Avtovaz and Renault Group management,” the ministry said in a statement.

Avtovaz, which is controlled by Renault and produces the Lada and Renault car brands, partially halted output at its plants in Togliatti and Izhevsk this week due to shortages of electronic parts.

The Russian industry ministry said that everything necessary was being done to resume operations at Avtovaz’s assembly lines, including the creation of components stocks.

More than 400 companies have withdrawn from Russia since it invaded Ukraine on Feb. 24, in what Moscow calls “a special military operation,” leaving behind assets worth billions of dollars.

Renault and other Western companies including food companies Nestle and Danone have faced criticism over their continued presence in the country.