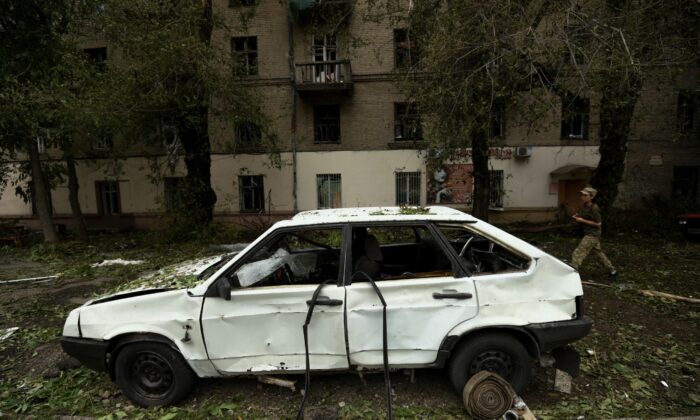 A Ukrainian servicewoman walks past a car damaged by a Russian missile strike in Dnipro, Ukraine, on July 16, 2022. (Mykola Synelnykov/Reuters)
Russia-Ukraine War

KYIV—Russia has ordered its forces in Ukraine to step up operations, its defence ministry said on Saturday, as rockets and missiles pounded the country in the latest of a series of bombardments that Kyiv says have killed dozens of people in recent days.

To the south, regional governor Valentyn Reznichenko said more than 50 Russian Grad rockets fell on the city of Nikopol, on the Dnipro River. Two people were killed, emergency services said.

Ukraine says around 40 people have been killed in such attacks on urban areas in the last three days.

Russia’s defence ministry said in a statement on its website that Defence Minister Sergei Shoigu had ordered military units to step up their operations to prevent strikes on eastern Ukraine and other territories controlled by Russia.

It said Shoigu “gave the necessary instructions to further increase the actions of groups in all operational areas in order to exclude the possibility of the Kyiv regime launching massive rocket and artillery strikes on civilian infrastructure and residents of settlements in Donbas and other regions.”

The ministry said Shoigu had issued his order after listening to reports at a command centre from generals leading the “South” and “Centre” command groups of Russian forces operating in Ukraine, as well as other commanders.

It was not clear from the statement, or the silent footage provided, exactly when the meeting took place or whether Shoigu and the commanders were in Ukraine at the time.

While the focus of the war, now in its fifth month, has moved to Ukraine’s eastern Donbass region, Russia forces have been striking cities elsewhere in the country with missiles and rockets in what has become an increasingly attritional conflict.

Late on Friday, Russian missiles hit the city of Dnipro, about 120 km (75 miles) north of Nikopol, killing three people and wounding 15, Reznychenko, governor of the Dnipropetrovsk region that includes both cities, said on Telegram.

Russia said on Saturday it had destroyed a factory in Dnipro making missile parts.

The war dominated a meeting of G20 finance ministers in Indonesia. U.S Treasury Secretary Janet Yellen said differences over the conflict had prevented the finance chiefs and central bankers from issuing a formal communique but that they agreed on a need to address a worsening food security crisis.

Western countries have imposed tough sanctions on Russia and have accused it of war crimes in Ukraine, which Moscow denies. Other G20 nations, including China, India and South Africa, have been more muted in their response.

Despite the bloodshed, both Russia and Ukraine described progress towards an agreement to lift a blockade in recent talks. Mediator Turkey has said a deal could be signed next week.

By Tom Balmforth and Max Hunder