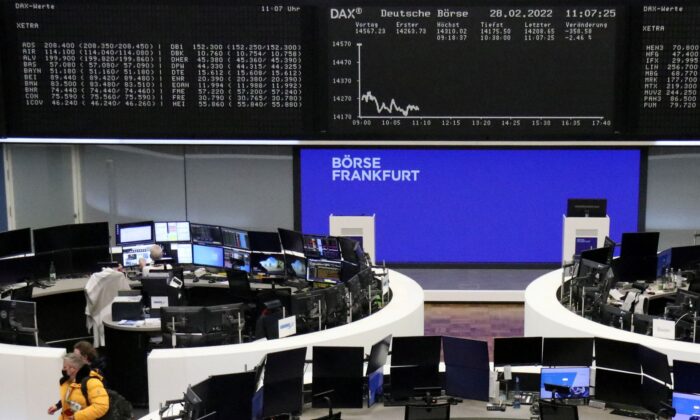 The German share price index DAX graph is pictured at the stock exchange in Frankfurt, Germany, on Feb. 28, 2022. (Staff/Reuters)
Stocks

LONDON—World stocks slid, oil prices jumped and the rouble tanked to fresh record lows on Monday, as the West ramped up sanctions against Russia for its attack on Ukraine that included blocking banks from the SWIFT global payments system.

Russia’s central bank raised its key interest rate to 20 percent from 9.5 percent in an emergency move, and authorities told export-focused companies to be ready to sell foreign currency as the rouble slid almost 30 percent to record lows versus the dollar.

As an economic crisis loomed in Russia, the fallout of tougher sanctions from the West imposed over the weekend rippled out across financial markets.

“The trading environment is highly dynamic, and we maintain a defensive stance as things could get a lot worse from here,” said Peter Garnry, head of equity strategy at Saxo Bank.

The ramp-up in tensions heightened fears that oil supplies from the world’s second-largest producer could be disrupted, sending Brent crude futures up 5 percent to $102.86. U.S. West Texas Intermediate crude futures were up $4.62 or almost 5.0 percent at $96.24 a barrel.

“I am telling clients all we know for certain is that energy prices are going to be higher, and there are going to be some beneficiaries,” said John Milroy, Ord Minnett financial advisor in Sydney.

“It’s an old cliché, but it’s true that uncertainty drives moves in both directions.”

As uncertainty continued to grip markets, investors plumped for the safety of the dollar, Swiss franc, and Japanese yen.

Sovereign bonds such as the U.S. Treasuries and German Bunds—regarded as among the safest assets to hold globally—remained in strong demand.

Money markets continued to push back rate hike expectations with investors now pricing roughly 30 basis points worth of tightening from the European Central Bank in total this year, down from 35 bps late last week.

Russia’s rouble dived almost 30 percent to a record-low 120 per dollar, but recovered some ground to last trade at just over 100 to the dollar.